With 2017 on tap, there’ll soon be a myriad of new, funny stories to discuss from all over the league. But before we turn the page on the 2016 season entirely, there is one more that I’d like to share:

The Haunting of the Pfister Hotel

Apparently, when teams make their way to Milwaukee for a road set against the Brewers, most stay in the legendary Pfister Hotel. By all accounts the hotel is lovely, clean, and accommodating, but there is one teeny, tiny problem: it’s haunted!

… Or a least, that’s what a ton of real-life Major Leaguers think.

I’ll spare you the details of each event, but here’s a list of the players (with the team they were on at the time of their scares and links to their stories) who’ve had bad/haunted experiences staying at the Pfister Hotel Milwaukee:

And there’s actually a lot more than that.

When the Braves visited Milwaukee a few years ago, The Upton brothers and Jason Heyward paid out of their own pockets to get hotel accommodations elsewhere. Their teammate, Chris Johnson, called them all “wusses.”

But my favorite Major League story sourced fro the Pfister Hotel comes out of Pittsburgh in 2016, where Pirates Manager Clint Hurdle had to comfort a player at night and reassure him that ghosts do not exist.

“I had a player call me one night assuring that there was a ghost, and the ghost had turned on his TV twice in one night.

“I actually had him come into my room — not to sleep. I settled him down, went back to his room with him, sat for a while. The TV did not come back on. I exited. Everything was OK. It’s real to some people, there’s no doubt.

Hurdle’s managerial skills were pushed to the limit with this one. After all, he had to invite another grown man into his hotel room to assure him that ghosts weren’t real and that everything was OK.

When he was later asked if he wanted to reveal the name of the player, Hurdle added, “I’m absolutely positive that I don’t want to name names. He’s still playing.”

Hopefully, 2017 comes and goes without too many hauntings. But if things get out of hand, we’ll just have to call rockies pitcher Jon Gray: Self-Proclaimed Ghost Hunter*

*Although, now that I think about it … aren’t all Ghost Hunters self-proclaimed?

Bears Are “Very Smitten with Brian Flores,” But Would They Restructure the Organization to Get Something Done? 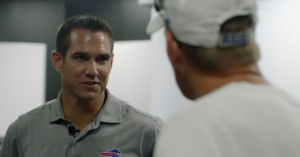 Around the Association: Drama in the LakeShow, Trade Market Shakeup, New No. 1 Atop the Power Rankings, More