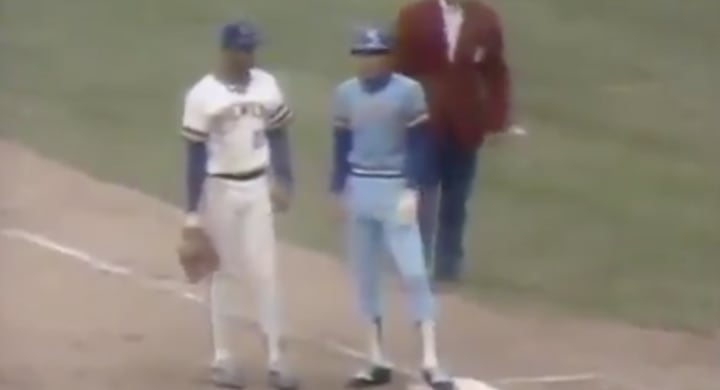 I think this is my new favorite MLB story, with a hat tip to ESPN.

Back in 1977, the Kansas City Royals had a game scheduled against the Milwaukee Brewers on a Sunday afternoon. But if you had joined the broadcast late that day, you’d have been extremely confused to see two squads of Milwaukee Brewers squaring off against each other …

Sometime after the end of the game on Saturday afternoon and before Sunday morning, a thief or thieves broke into the Kansas City clubhouse and stole “53 Royals’ uniform shirts, 20 fielders gloves, 10 pairs of baseball shoes, and 15 warmup jackets,” per the New York Times original coverage.

Speaking of which, that original article has more than one gem:

Only seven Royals wore complete uniforms, including Jim Colburn, the starting and losing pitcher, and his catcher, Darrell Porter. Coincidently, Colborn and Porter were traded by Milwaukee to Kansas City last winter.

“I’ve heard some funny stories, like you can’t tell the players without scorecard — or with one,” Colborn said laughingly, before the game.

“Hey, who wears this uniform for Milwaukee?” said Amos Otis, the Kansas City center fielder, as he pulled a Brewer Jersey bearing No. 2 over his head.

Otis, one of those whose glove was stolen, was informed that No. 2 belonged to Alex Grammes, the Brewers manager. Otis then asked whether Grammas had been a good hitter as a player.

Told that Grammas had a. 247 career batting average, Otis promised to do better and collected two hits in four times at bat, but his teammates got only five off Jerry Augustine. The 6‐foot left‐hander who evened his won‐lost record at 7‐7, had not lasted more than two innings in his last two starts.

This is really one of the oddest and funniest stories in a while. Unfortunately, it’s probably not something that can ever really happen again. I guess the closest we got was the time Chris Sale cut up all the White Sox throwback jerseys, because he didn’t like how it felt.

Mookie Betts Might Be the Nicest Outfielder in Baseball

The Kid Who Impersonated Craig Kimbrel? He Got to Meet the Man Tonight

How Do You Throw It So Wildly From Shortstop That You Hit an Umpire in the Face? 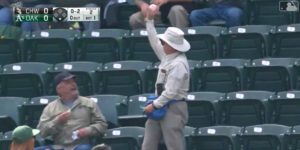