Did You Know a Mets Fan Parachuted into Shea Stadium During the Bill Buckner Game? Skip to content 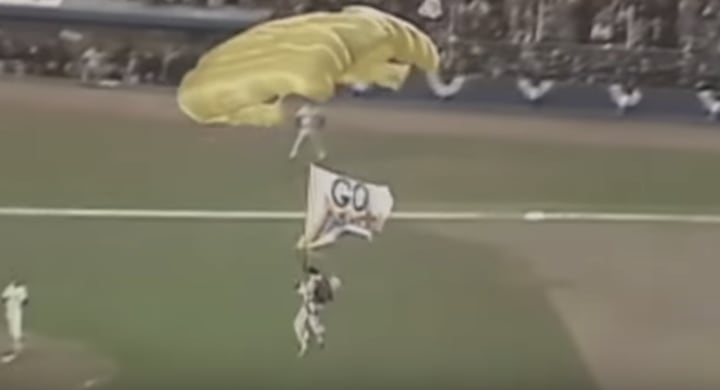 Every baseball fan in the world has seen the Bill Buckner “between the legs” gaffe at one point or another (at this point, it’s practically pop-culture). But in case you need a refresher, let’s have a look at the video below and relish in the fact that you’ll probably never have as much egg on your face as Buckner did around the 7-second mark.

It wasn’t his fault, it was the curse!

But before Game 6 of the 1986 World Series was ever the “Bill Buckner” game, it was defined by a crazy fan/actor/musician named Mike Sergio, who parachuted into Shea Stadium in the first inning with a “Let’s Go Mets” banner.

Here’s the clip with a h/t to ESPN for digging it up:

According to Sergio, this was “performance art” … LOL.

ESPN writes that Sergio “was arrested and released … [but] refused to give up his accomplice — the pilot, who violated FAA rules with the flight — and spent three weeks in jail as a result, claiming only that “I’m just glad I had my parachute on when I fell out of the bleachers.”

What a freakin’ boss line. I think he’s my new hero.