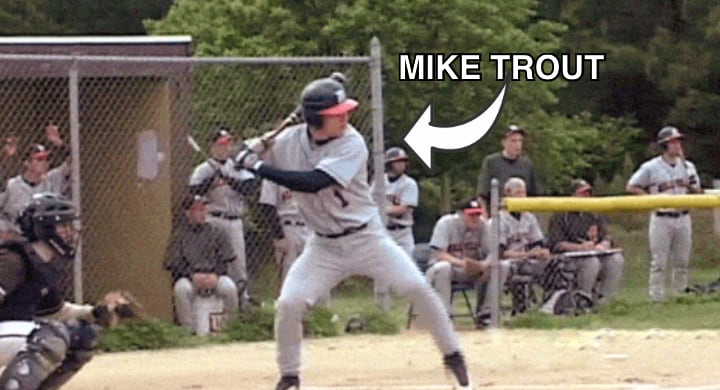 Mike Trout is really good at baseball. In fact, he’s the greatest player of his generation and will probably go down as one of – if not the – best of all time. He’s actually on pace for … blah, blah, blah … you know the drill, by now. He’s really, really good. The point has been made before.

What I didn’t know, however, popped up in this old scouting report on Trout (and Bryce Harper) unearthed by Michael Clair at Cut4 back in 2015.

Not only that, but Trout experimented with switch-hitting because of his father, a Minor League player. Though Trout never tried it out in game action, only showing off for scouts when they asked before games and during batting practice, he does have one highlight as a lefty. Said Trout:

“I actually beat my high school team in home-run derby left-handed. They made me hit left-handed. … They told me I had to hit lefty or I couldn’t play.”
Sadly, according to the center fielder:

“It was just something people thought, maybe down the road if I want to do it. But I don’t think there was any potential there.”

Trout’s high school team was so scared of his power in their HR Derby, they said he had to bat left-handed if he wanted to participate at all. And somehow he STILL won. That’s insane. And impressive. I’m suddenly having dreams of a switch-hitting Mike Trout in the big leagues (not that he needs the advantage).

No … Way: Brandon Woodruff Just Accidentally Kicked the Ball for a Force Out at First Base

What Did You THINK DJ LeMahieu Was Gonna Do to a 48 MPH Pitch?

You’ve Never Seen This: There’s Not a SINGLE Right-Handed Batter in the Rays Lineup Tonight