How Hard Can it be to Catch a Baseball from the Top of the Washington Monument? Skip to content 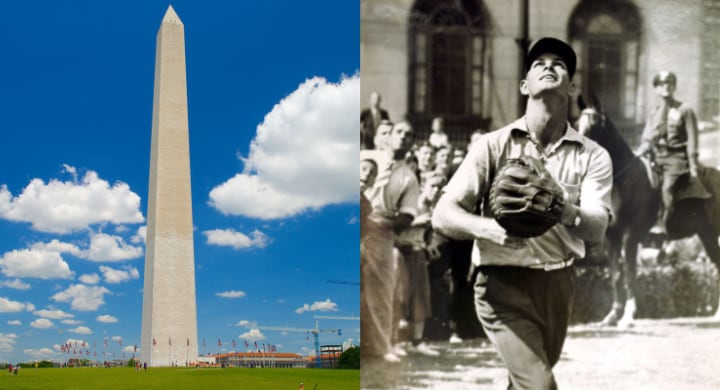 I guess I always assumed that the world of X-TREME stunts was limited to the more recent, Red Bull-infused American culture of the 90s and 2000s, but it turns out people have always loved doing (and watching other people do) crazy sh*t.

Like, say, throwing baseballs off extremely tall buildings/structures and seeing if their friends below can catch it.

Players of yore found a novel and dumb way to make baseball dangerous: trying to catch balls dropped from hundreds of feet. https://t.co/lYNcLEldmG

Over at MLB.com, Eric Chesterton ran down some of the record-setting/breaking feats of catch from great heights and it is absolutely worth your time today. His story begins in Washington D.C. in 1908, when Senators catcher Charles “Gabby” Street tried to catch a ball dropped from the top of the Washington Monument.

It continues seven years later, when Dodgers Manager Wilbert Robinson tried to catch a baseball from a literal airplane, though he was met with a very unexpected (and tasty?) surprise.

But the ultimate story from Chesteron’s stroll down memory lane happened 30 years after the Washington Monument stunt, when five members of the Cleveland Indians tried to catch baseballs off the top of the 708-foot Terminal Tower (a stunt that drew 10,000 fans in attendance). One of the catchers, Hank Helf, comes in for the money quote: “They looked the size of aspirin tablets when they started down,” Helf said, “and when they got closer, they had stopped spinning and were dancing like knuckleballs. I didn’t know if they were going to hit my glove or my head.”

Apparently, according to estimations at the time, the balls reached a velocity of 138 MPH on their fall and bounced up to six stories high when they missed a glove.

As you can imagine, the catch left a bruise, but kept Helf in the record books.

Check out more details, quotes, and images at MLB.com.