On This Date in 1964, Ken Johnson Threw a No-Hitter Against the Reds ... and Lost Skip to content 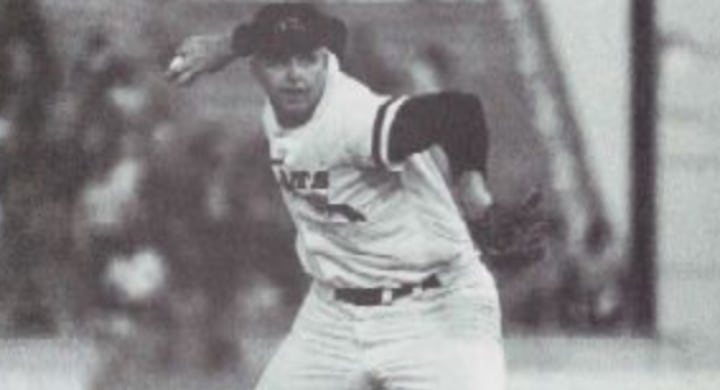 Is it really better to have loved and lost than to never have loved at all? I know that’s the prevailing wisdom, but I’m not so sure pitcher Ken Johnson would agree.

Back on this date in 1964, Ken Johnson threw 9.0 innings of no-hit baseball against the Cincinnati Reds (his former team), which usually results in an update to the old history books. Unfortunately, he also lost that game.

The Society for American Baseball Research has the story:

The game began with Johnson’s strikeout of 1963 National League Rookie of the Year Pete Rose, who became the central figure in this history-making event.

Winning pitcher Joe Nuxhall — who almost ruined the no-hitter when he nearly beat out a bunt — led off the ninth with a groundout to third baseman Bob Aspromonte. Rose came up next and dropped a bunt on the third-base side of the mound, 15 to 20 feet in front of home plate. Johnson pounced on it, half straightened up and threw wildly to first baseman Pete Runnels and Rose made it to second.

With Rose on second, Chico Ruiz smashed a line drive off Johnson’s shin that left a mark the shape and color of a large plum. Aspromonte fielded the carom and fired to Runnels at first to nip the speedy Ruiz as Rose took third. Needing one out to preserve the no-hitter and shutout, Johnson delivered to Vada Pinson, who hit a routine grounder to second baseman Nellie Fox. The normally surehanded Fox (in his first year with the Colts and 18th in the majors) fumbled the ball, allowing Rose to score as Pinson reached first.

Fox was near tears for making the error that caused Johnson to make history by losing. He approached Johnson in the Houston dressing room immediately afterward. “Ken, I’m sorry I had to mess it up,” Fox said. “Don’t feel bad about it, Nellie,” Johnson replied as he put his arm around Fox’s shoulder. “I put the guy on myself. I came up throwing. A good throw would have nailed him.”

So to condense that down … Batter No. 1 comes up and grounds out. Batter No. 2 (Pete Rose) bunts and reaches second base safely on a wild throw/error by the pitcher, Johnson. Batter No. 3 laces one off Johnson’s leg, advancing Rose to third base, before getting thrown out at first, himself, for the second out of the inning. And then, with the no-hitter (and technically, the game) on the line, batter No. 4, Vada Pinson, hit a routine grounder to second base … which was fumbled for an error, allowing Rose to score the eventual game-winning run. Unreal.

I know we just talked about Yu Darvish missing out on history TWICE by failing to get the final out earlier today, but I’m not sure which is worse:

I Still Can't Believe Yu Darvish Lost a Perfect Game *and* a No-Hitter with 2 Outs in the 9th in Back-to-Back Seasons https://t.co/sbGlMO2J9Y

Let’s just say, everyone wants to be in the history books … but only for the right reasons.

WATCH: Shohei Ohtani Just Doubled on a Groundball to Shortstop

Former Big Leaguer Tim Melville Just Threw a 142-Pitch No-Hitter in Taiwan and Then Did a … Uhm, Dance?

OOPS! Cody Bellinger Hit a Two-Run Home Run That Counted for One Run