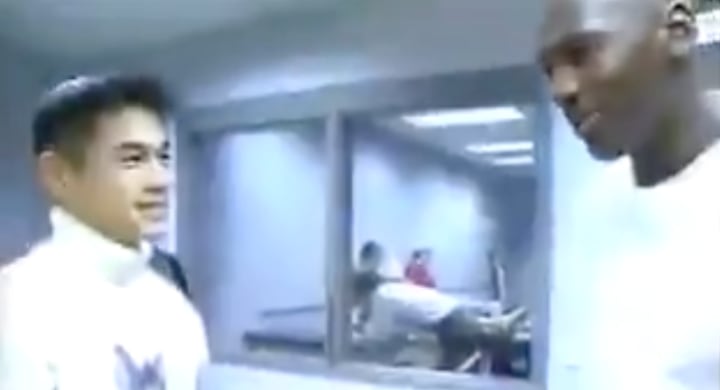 Ichiro Suzuki may not be the greatest baseball player of all-time … but he’s certainly one of them. Here are just a few of his career highlights, in case there’s any dispute:

Oh, and he’s also a card-carrying member of the 3,000 hit club, an accomplishment shared by only 31 other MLB players. Indeed, depending on your perspective, it’s arguably fair to say Ichiro Suzuki is the world’s All-Time Hit King.

But in 1995, Ichiro, 21 at the time, was in just his fourth professional season in Japan, and coming off his FIRST 200-hit season. So when he was afforded the opportunity to meet the Michael Jordan, his reaction was not that of one great meeting another. It was closer to a fanboy meeting a Luke Skywalker.

“Nice to meet you. My name is Ichiro.”

He probably practiced that 100 times. And then just like that, his translator sold him out: “He’s really nervous right now.” Come on! Don’t do him like that! Not in front of the GOAT.

Not to leave him out in the cold, Ichiro’s translator does mention that Ichiro just notched a 210 hit season, the impressiveness of which you can tell Jordan doesn’t really comprehend.

And then to put an absolute bow on it, Ichiro says he’s not going to come to America until he gets arms as strong as Jordan’s. I love it. What a perfect moment.