If We Played By the Rules from 1887, Four Players Would've Hit Over .400 Last Year Skip to content 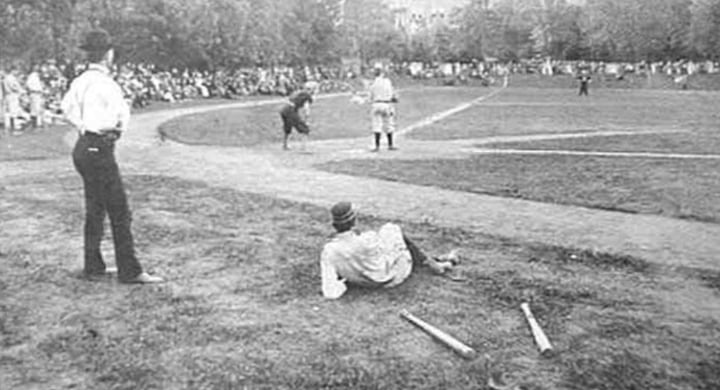 The rules of baseball continue to change almost every year, but the game was vastly different in the century the sport was invented compared to the one that followed. Indeed, before the turn of the 20th century, the core rules of the game had not yet settled into place, which often forces us to cut ties with anything that happened before the “modern era.” But that’s a shame. The 19th century was full of ridiculous, unrepeatable accomplishments and unusual rules, and they’re plenty of fun to recall.

For example, Cut4 writer Chris Landers assembled some of the most bizarre rules in baseball history, most of which didn’t live to see the 20th century. And you’ll absolutely want to check it out:

Some rules forced pitchers to throw underhand, others allowed umpires to be chosen at random from the crowd, but the rule that stuck with me the most was the *one* year walks were scored as hits (1887).

Here’s what Landers had to say about that particularly short-lived idea:

A staggering 11 players hit .400 that season, nine of whom wouldn’t have had walks not counted as an at-bat. The statistics were even rewritten in 1968 by the Special Baseball Records Committee, with drastic consequences: Cap Anson, who hit .421 to lead the league in 1887, had 60 hits taken away, which stripped him of not only the batting title but the honor of first-ever member of the 3,000-hit club.

Don’t worry, in 2001, MLB reversed the Committee’s decision, and Cap now sits proudly in the Hall of Fame with over 3,400 hits.

But just think about the implications of that rule change. No, in retrospect the actual outcome of these games probably wouldn’t be affected  – walks are still walks and the guy would be on 1B regardless of how it was scored in the books – but the statistical implications are pretty funny to consider.

Only three players (Yelich, Rendon, Marte) from the original list made it into the top-10 by 1887 standards, which again … wouldn’t actually change much, but just goes to show how different batting average could have been perceived. It certainly would have tracked much closer to OBP, which, as we know today, is probably a better (albeit still imperfect) overall indicator of true offensive success. So … I guess the folks back in 1887 were just ahead of their time by about 120 years? Good for them.

Much more at Cut4.