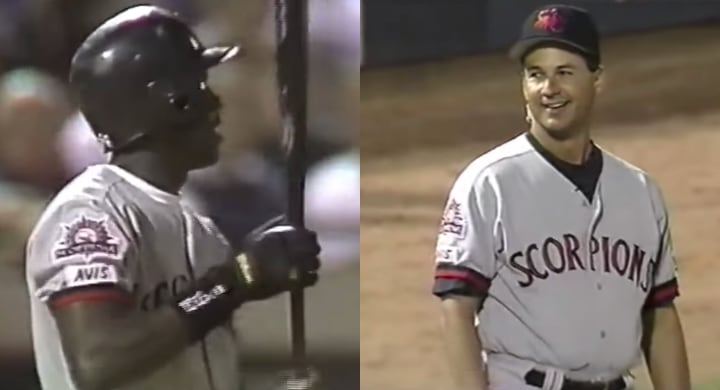 Early last week, I took a look into Michael Jordan’s time as a prospect on the Scottsdale Scorpions in the famously loaded and challenging Arizona Fall League, which followed his Double-A debut that season. And to my surprise, he did quite well.

Here’s a small part of what we discussed:

In just under 500 plate appearances at Double-A that summer, Jordan slashed .202/.289/.266, with 17 doubles, a triple, 3 homers, 51 RBI, and 30 stolen bases. He also managed to walk 51 times, which is double-digit walk rate! Something, something, Moneyball! And in the AFL, Jordan finished with a .252 batting average in 120 plate appearances. For a guy who hadn’t played baseball since high school, hitting .252 against the best the minors had to offer is seriously impressive.

But thanks to the fanfare of ESPN’s The Last Dance, more footage of Jordan’s brief attempt to do the baseball thing has surfaced. For example, you can watch a Mic’d up Terry Francona (then the Scorpions manager) discuss Jordan’s progress as a player during one of his at-bats.

And that at bat happens to end in something great:

Terry Francona Mic'd Up As He Is Coaching Michael Jordan

Terry Francona managed MJ during his stint in Minor League Baseball. Here is a cool video of Tito mic'd up as Michael hits a TRIPLE!

“I’ll tell you what, this guy has really come a long way. And I think best of all, is his knowledge of the game that has gotten so good. That’s what’s made him improve so much as a player. He knows where to throw the ball and what base now. He understands hitting counts, he’s kinda getting the idea of the cat and mouse game between the hitter and the pitcher … LOOK AT THIS!’

Fun of the triple aside, I can really appreciate Francona’s earlier comments on Jordan’s concerns: “He was more worried about taking the place of some of our younger players than with how he was really doing. He just wanted a little bit of reinforcement that he was taking the right path and that he wasn’t just kinda embarrassing himself.”

Good on Francona for sharing *that particular* part of Jordan’s previous comments and good on Jordan for staying self-aware (like I said, the AFL really was loaded with top prospects at the time). Obviously, the baseball thing didn’t work out for MJ, but hey, when you can fall back to NBA superstardom and three more rings with the Bulls, I think it’s a little easier to sleep at night.