You Can Actually Strike Out on Fewer Than Three Pitches ... And It’s Already Happened! Skip to content 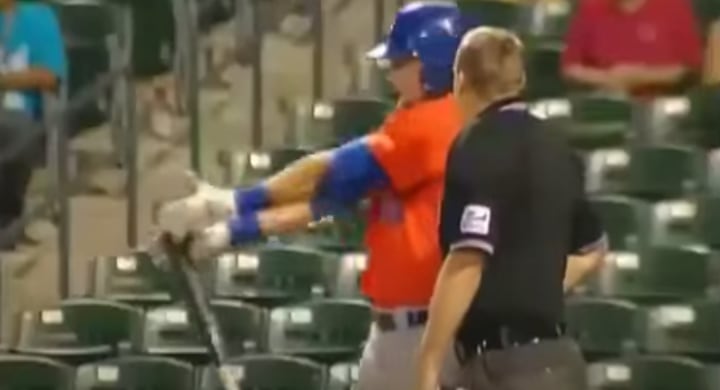 That headline isn’t a joke, and I won’t even drive you around the block before dropping you off. A batter really can strike out on fewer than three pitches *and* it’s already happened. With a tip of my hat to YouTuber Star Raving Sports, I’ll explain how that happens first, then show you an example of it happening in real life.

Basically, once a batter takes his place in the box, he’s expected to go through the stages of that at-bat promptly. And if, for some reason, he’s delaying the game, the umpire can simply call a strike. And if after that first called strike the batter still isn’t getting the hint, the umpire can call another. If three strikes are called, the batter is out.

Now, is it easy for me to envision an umpire getting frustrated enough with a batter to call one strike for not getting his butt back in the box? Of course. I watch baseball, I’ve seen such petulance. But surely it wouldn’t rise to a completely umpire-aided strikeout, right? Wrong!

It happened in 2013, when batter Vinnie Catricala didn’t like a first-pitch called strike from umpire Ron Teague. As you’ll see, Catricala steps out of the box to argue just long enough for Teague to call strikes two and three on him, before throwing him out of the game:

So in total, Catricala faced only one pitch, but on the books, he struck out. Unreal. Baseball is so weird. I love it.

As for Catricala, he never made it to the big leagues. In fact, 2013 was his final season in professional baseball. He never made it past Triple-A, but he’ll likely be remembered forever, thanks to his one-pitch strikeout.