It’s been a weird and challenging last couple years for Mike Trout, who has battled a number of injury issues – including the scare about his back – and has been able to play just 135 games total between the two seasons. Throw in the pandemic year in 2020, and we haven’t been able to see much of Trout since 2019.

Which is a bummer, because Trout, 31, was seen by many as one of the best players of all-time, and that period was a part of his prime. Losing any chunk of that is hard to swallow.

… but Trout is here to remind us that he hasn’t actually gone anywhere. He’s still incredible. And now he’s homered in SIX STRAIGHT GAMES:

That was Trout’s 34th homer on the season, despite the fact that he missed a month and a half. The only hitter in the AL with more homers is Aaron Judge!

On the season, Trout is now hitting .280/.369/.629/177 wRC+, which is actually better than his career average slash line by wRC+. He would like you to remember that, whatever has happened in recent years, he’s still one of the best ever.

… and it’ll be interesting to see what happens with the Los Angeles Angels after the sale of the team, and whether Trout sticks around or seeks to be traded. 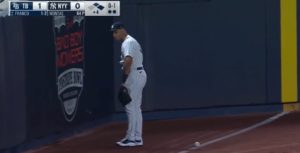