Matt Nagy's Attention to Detail Is Ridiculous, Borderline Obsessive … And Could Come In Handy Skip to content

The Chicago Bears attacked their head coaching search aggressively this January and came away with Matt Nagy, who, on the surface appears to be the anti-John Fox – and not just because he is a young, up-and-coming, offensive-leaning head coach.

Patrick Finley of the Chicago Sun-Times presents a deeper dive on Nagy, unearthing some of the unexpected things the Bears’ new coach did to prep himself for his first shot at the helm, and his thirst for knowledge, in particular, is quite striking.

Let me first set the stage.

When Nagy was climbing the ladder as a coaching intern, coaches’ assistant, and offensive quality control coach from 2008-2012, he often took notes alongside Louis Riddick, who worked in the Eagles’ front office at the time and was making his own run to the top as a pro scout and, eventually, the team’s Director of Pro Personnel, as he prepared and delivered advance scouting reports.

Nagy also spent time with Doug Pederson, who served as an offensive quality control coordinator and QBs Coach at the time, talking about the quarterback position in great detail. Soon, it became clear to everyone around him that Nagy was a sponge, whose quest for knowledge would help accelerate his growth as a coach over the years.

Indeed, Finley recently caught up with Riddick, now an ESPN analyst, and said as much: “He [Nagy] was one of those guys that was always looking for more knowledge,” Riddick told the Sun-Times. “His observations were sharp. His opinions were sharp. His football acumen is right up there with anybody’s.”

Hey, that’s some nice praise from a quality source.

Later, the Bears’ new coach explained to Finley that he also kept a journal, which included some of Andy Reid’s speeches and the reasons behind them, for two years hoping it would serve him, in some capacity, down the line. I guess, as the Bears new head coach, it’ll now come in handy, but yeesh, thats’ some long-term planning. Then again, Nagy’s attention to detail – even if it appears to border on the obsessive – will be refreshing after it felt like some of those things were overlooked – or, let’s be honest, flat-out missed – at the end of Fox’s tenure in Chicago.

“It could be during a losing streak — a way of reaching the team and connecting with them,” Nagy told the Sun-Times. “Sometimes it’s tough love; it could be calling people out, connecting with them. [The detail is] good if you write it down. The other part is, it’s about life. I’ll jot it down so I have it.”

Considering the rough starts to recent seasons and a potentially daunting schedule in 2018, some of Reid’s speeches could come in handy for Nagy, and perhaps sooner than expected. 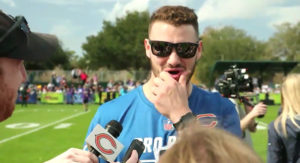 What Do Mitchell Trubisky, Aaron Rodgers, Kyler Murray, and Jimmy G Have in Common? And Other Bears Bullets