If the Chicago Bears’ offense is going to play up to its potential in Matt Nagy’s first season as head coach, the offensive line will need to set the tone and get things moving in the right direction. And to that end, well, they have some work to do.

Mark Chichester of Pro Football Focus ranks the offensive lines of the NFL by pass-blocking efficiency, a metric in the site’s signature stats package intended to measure quarterback pressures allowed on a per-snap basis. And when it comes to Chicago, there’s a bit of concern regarding how things are going to line up in 2018.

The Bears’ 77.9 pass-blocking efficiency ranks 19th among the league’s 32 teams. Chicago’s offensive line allowed 152 pressures, 109 hurries, and 26 quarterback hits on 536 passing plays. That is a significant amount of pressure, especially if you consider that the 536 passing snaps were the fewest in football last season. You’re up, Harry Hiestand.

Sure, injuries played a major factor in the Bears’ pass-protection problems and we simply can’t ignore that. PFF notes that nine different offensive lineman played on at least 100 pass-blocking snaps in 2017. Guard Kyle Long and tackle Bobby Massie are projected to start on the right side of the line this season, and both are coming off respective season-ending injuries. How they handle responsibilities upon their return will tell us a lot about how this group plays in 2018.

The group’s biggest issue might be in replacing left guard Josh Sitton, who was the team’s best individual pass blocker with a pass-blocking efficiency grade of 97.4. Sitton was experienced and excellent during his time with the Bears, but injuries slowed him down, kept him off the field, and were likely a deciding factor in the Bears not picking up the third-year option on his contract.

Chicago used the draft to find Sitton’s replacement, choosing Iowa’s James Daniels in the second round. The plan is to convert Daniels from center to guard, a position he played as a true freshman with the Hawkeyes. And the hope is that Daniels’ pass-blocking efficiency follows him from Iowa City to Chicago. Daniels allowed just 10 pressures on the 371 pass-blocking snaps he played as a junior.

There is little doubt that the Bears will be able to run the ball effectively in 2018. Jordan Howard is coming off back-to-back 1,000-yard seasons and proved to be a productive workhorse in a less-than-inspiring offense orchestrated by Dowell Loggains. Tarik Cohen was able to break out with some big runs here and there when he was asked to spell Howard from time to time.

Chicago’s offensive line boasts three of the best run blockers at their respective positions, as Long, left tackle Charles Leno Jr., and center Cody Whitehair excelled a clearing space in the running in 2017. It’s just that the pass-protection leaves something to be desired. 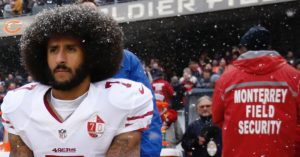 Jon Heyman on the Cubs’ Next Offseason: “I Hear They’re Gonna Spend”

And With the No. 7 Pick in the 2022 MLB Draft the Chicago Cubs Select … Probably Not a Pitcher