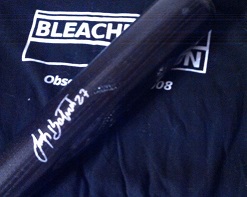 It’s that time of year when MLB’s contenders pull out all the stops in order to acquire a dependable starter or flame-throwing reliever for their respective pennant pushes.

And if Matt Nagy didn’t have better things to do with his summer and fall, he would probably garner a ton of attention based on his first pitch before this afternoon’s Cubs game:

That one left a vapor trail, folks!

Nagy can now be considered a proven strike-thrower after his performance at Wrigley Field (and Guaranteed Rate Field). In both of his first-pitch efforts, Nagy has shown off good mechanics, a smooth release, and a rocket of a first-ball fastball. This one even received some framing guidance from left-handed reliever Randy Rosario, who has clearly been taking notes from recent acquisition Martin Maldonado.

Well done, coach. Now hit the showers, you’ve got some bigger fish to fry starting in a few weeks.