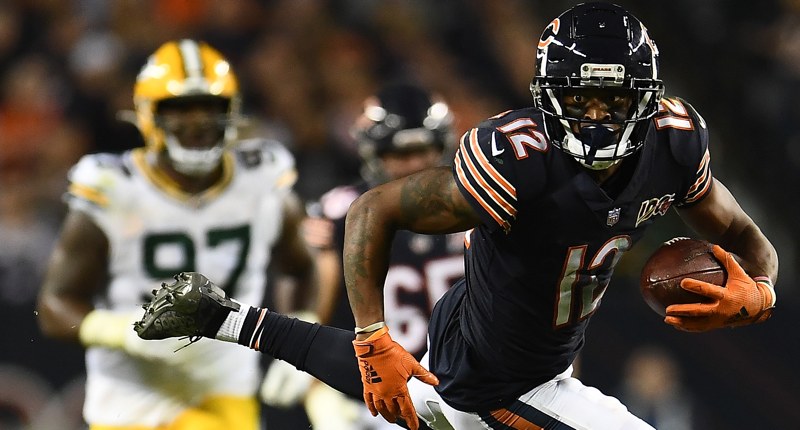 There remains a glimmer of optimism of the Chicago Bears’ offense.

Allen Robinson on the Bears offense: "It's not rocket science, it's not anything that can't be corrected. We should have this corrected by next week."

Wide receive Allen Robinson believes the Bears’ offensive issues are fixable. More than that, Robinson thinks they can be fixed by the time Chicago takes the field for its Week 2 showdown against the Broncos. For what it’s worth, I appreciate the optimism. I’ll take all of it (and then some) while I can one day after the Bears offense struggled in all facets of the game.

The Bears have so much to work on between now and Week 2, I’m not sure where to begin. Play-calling needs work, as dropping back 53 times while calling just 12 designed runs is not an ideal balance. Pass-protection and run-blocking could use some bolstering. Discipline was lacking, with penalties thwarting drives left and right. And then there was quarterback Mitch Trubisky, who was flat-out painful to watch on Thursday.

One thing that doesn’t need fixing on the offense is Robinson. That guy was a monster against the Packers, as he put the offense on his back and did all he could to make a game of it late.

Robinson had his first 100-yard regular-season performance as a member of the Bears on Thursday, hauling in seven passes for 102 yards. Trubisky made Robinson his most-often targeted receiver, which was going well for the most part. That was, of course, until Trubisky telegraphed a throw intended for Robinson and was picked off by ex-teammate Adrian Amos on a dagger of an interception.

Robinson can run the entire route tree from any number of spots on the field. Some of his best work came down the sideline, particularly on some big-time throws that were on the money.

Let’s check some out:

Allen Robinson put him to SLEEP with the route 😴😴 @AllenRobinson pic.twitter.com/TzHOvm7vtC

PFF called Robinson “a lone bright spot” for the Bears’ offense on Thursday. Robinson was credited with three explosive plays (ones that go for 15+ yards), pulled in three contested catches, collected a pair of broken tackles after the catch, and posted a 92.2 receiving grade on the six “go” routes he ran. Those are elite numbers and grades. Imagine how many more catches and yards Robinson could have had if Trubisky had found any semblance of a rhythm at any point of Thursday’s game. (Actually, don’t do that to yourself. It will only cause pain.)

Robinson is arguably the most important skill-position player on the Bears offense. Even though it didn’t play out this way last night, if Robinson is having big games, it probably means Trubisky is, too. Perhaps Robinson’s excellence will force defenses to throw extra attention his way, allowing for other pass-catchers to shine elsewhere on the field. It isn’t a far-fetched idea, but Trubisky needs to see it and take advantage of it for the plan to work.

The Bears have 10 days to figure out how to fix what looked to be a broken offense. And while we don’t have all the answers, at least one solution has presented itself with Robinson’s success.