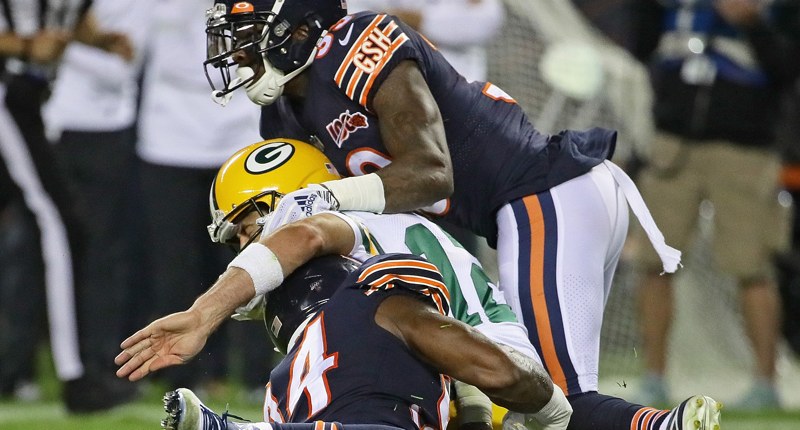 So many awful things happened for the Bears last night, I couldn’t blame you if you chucked the entire game into the dumpster, lit it on fire, pushed it off a cliff, and never spoke of it again. But THAT defense deserved better because those guys balled the heck out last night.

Rodgers is sacked for the third time tonight.#GBvsCHI | #Bears100 pic.twitter.com/8rOWTaMsoU

Highlights were aplenty for Chicago’s defense, but the numbers also back up the unit’s stellar play.

The Bears defense limited the Packers offense to 13 first downs, 213 total yards, and 3.7 yards per play. They also sacked Aaron Rodgers five times, were credited with seven quarterback hits, and nine tackles-for-loss. That’s a defensive performance that should have been good enough to win the game. PERIOD.

To be fair, it wasn’t perfect. And because the offense was so atrocious, the Bears defense needed to pitch a perfect game just to win. This is where we acknowledge the only hiccup of Thursday’s defensive effort:

Aaron Rodgers to Jimmy Graham. Touchdown. Bears had 12 players on the field on the play anyway.

As if anyone needed a reminder of just how good Aaron Rogers is, well, there you have it.

There has been ample chatter about the Bears’ defense regressing in 2019, though I’m not sure how much of it is rooted in anything based off numbers and logic. Using Football Outsiders’ DVOA as our guide, we took a look at the last 10 teams who finished first in the site’s defensive grading metric. Eight of those teams followed up with a top-10 DVOA season the year after finishing first. Four of those teams finished in the top-5, which also includes two teams that finished No. 1 in consecutive seasons. The only two teams to finish outside the top-half of the DVOA rankings the year after finishing No. 1 — 2012 Bears and 2011 Ravens. Two outliers in what is otherwise a proven trend that the best defenses are going to stay at the top of the rankings, with “regression” being represented in a minor slip from the top spot.

And yet, having a smash-mouth defense that roughed up an all-time great quarterback in the season-opener isn’t all that valuable if their teammates on the offensive side of the ball can’t do more than muster up one measly field goal.

Eddie Goldman Become the Billionth Ex-Bear to Join the Falcons