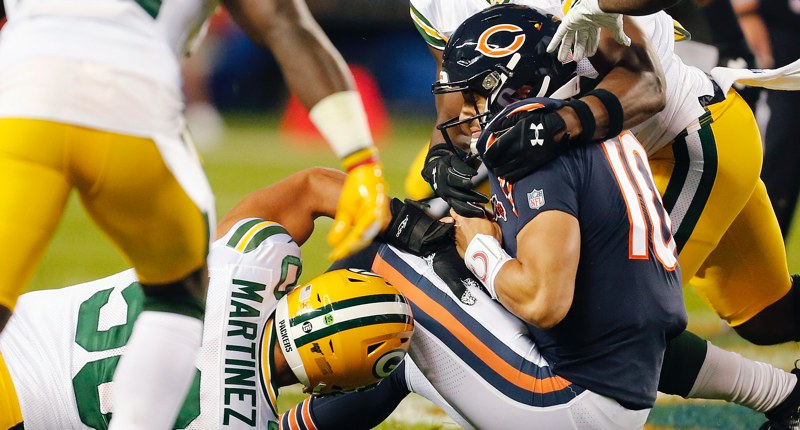 You thought your night was bad? At least you didn’t leave a tub of Cool Whip you were going to use to top a cake you baked in the afternoon out on the counter for seven hours.

.@bears first play from scrimmage was “classic Nagy” if only they could catch the “egg toss”. #BaldysBreakdowns pic.twitter.com/lsjpvt0O9L

Matt Nagy's explanation of going for it on 4th and 10 and not kicking a 51-yard field goal: "We weren’t at our number, what we said at halftime and during the beginning of the game. We knew already on third down if we don’t get it, we’re going for it."

Remember when the Browns out of nowhere played Duke Johnson as a receiver a couple of years ago?

Bears basically did the same thing with Tarik Cohen yesterday.

These are the throws Trubisky has to hit to be a viable NFL starter. Terrible placement pic.twitter.com/dMJYVHFl3Z

Absolutely no reason to throw a corner route with that bracket defender carrying it all the way. Tarik was right there. pic.twitter.com/9QvBcLtoyn

Fun exercise. Try playing quarterback on this play when you watch it for the first time. Good luck. pic.twitter.com/jQvq9myjjI

Thanks to the fans tonight #Beardown we will come back stronger pic.twitter.com/BDyOT4UHG0

The Packers offensive line is literally holding on every offensive play and crickets.

I love Warren but the comp pick thing has literally nothing to do with Ryan Pace https://t.co/PPSKvCCNDO

The one Mitch play I was happy about: He hit that intermediate crossing route throw to Gabriel! The one he always misses!

It was incomplete because Gabriel is tiny, and he had a dozen horrendous plays today. But he hit that one!

…but I’d rather care. I’ve held onto my fandom even as a reporter in large part because the relationship I had with my dad was built on the Bears. And with him gone, believing in them makes me feel close to him. That’s the long and short of it.

Need something for your ears? Ep. 1 of MYPOD is out! @Michael_Cerami and I talk working in sports media, MLB stardom and movies. Oh, we also play a fun round of What Would it Cost? (sound bite below)

Listen for free on iTunes, Spotify or PodBean ➡️https://t.co/kqpFckYghk pic.twitter.com/Ylo4xH7NSA