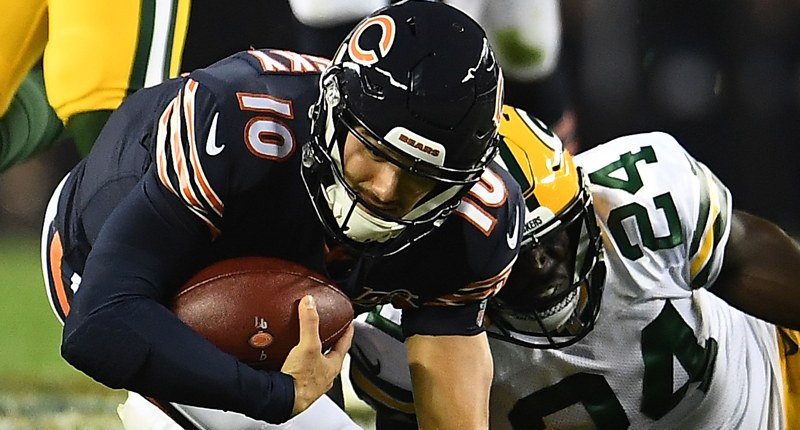 Statistically speaking, Mitch Trubisky has put more good tape out there than bad. But when it has been bad, it has been really bad.

Just take a look at these numbers:

YIKES. That is an ugly collection of numbers in what has become a growing pile of Trubisky-related concerns. Because while Trubisky took a step forward from his rookie season to his second year as Bears quarterback, he still has a long way to go before being the quarterback Chicago wants (and needs) him to be moving forward. And sure, there were plenty of reasons why the Bears’ offense was woeful in a 10-3 loss to the Packers on Thursday that went beyond Trubisky. But he (and his final line) was at the top of the list: 26/45, 228 yards, 0 TD, 1 INT, 62.1 passer rating, 18.5 QBR. To call that line gross wouldn’t be doing it any justice.

One of Trubisky’s biggest flaws is his inability to consistency throw on time.

The more hitches a QB takes:
The smaller the windows.
The receiver is too far out of their break.
The line has to block longer
The safeties cover more ground.

Seriously, this chart is no damn good:

So, Trubisky was 5-for-18 on throws of 10 yards or more? Yikes. pic.twitter.com/NcZIkxpi75

And to make matters worse, the Packers’ entire game plan was essentially to sit and wait for Trubisky to make a mistake in crunch time:

If that tone and sentiment feel all too familiar, just know it is because history has a cruel and unusual way of repeating itself:

Charles Woodson on Cutler postgame, "it's the same old Jay. We don't need luck, Jay will throw us the ball…proof is in the pudding."

OOF. To say that a team is in trouble if the quarterback actually has to play his position is the most damning thing you can say about a quarterback.

As you would expect, the advanced analytics from Pro Football Focus don’t paint a pretty picture of Trubisky’s performance. And why would they? He stunk. According to PFF’s metrics, 53.3 percent of the passes Trubisky threw were uncatchable. That’s not good. And when the Packers took away Trubisky’s first read, he posted a 30.9 passing grade. Trubisky also struggled to throw down-field, position a 35.3 adjusted completion percentage and posted a 46.4 passing grade on throws of 10+ yards down the field. So while Trubisky graded out better than Rodgers on plays from a clean pocket (a place where Trubisky struggled the most last year), it wasn’t good enough because everything else was terrible.

For all the hype and all the chatter from Matt Nagy about his pupil’s progress, it sure as heck wasn’t on display last night.

This is where you would expect me to offer up words suggesting better days ahead. Instead, here are some highlights:

Allen Robinson is back.

What was most maddening about last night is that we have seen Trubisky perform better — and in more dire circumstances. Because while Trubisky struggled in the first half of that playoff game against the Eagles last year, he and the offensive coaching staff made adjustments to right the ship. Then Trubisky went onto lead a fourth-quarter touchdown drive and one that would have led to a game-winning field goal had there not been a pair of doinks involved. But this time, there were no scapegoats or excuses. This one was all on Trubisky’s shoulders.

I am struggling to find words that would conjure up confidence leading into next week’s matchup against the Broncos. Maybe I will find them with time. But the only solace I can offer today is that we have seen Trubisky bounce back from awful performances before. So while I won’t go out on a ledge and predict (with confidence) it will happen again, at least we know what it looks like to see a guy get off the mat and deliver for his team. Once again, the ball is in your hands, #10. Do something productive with it.