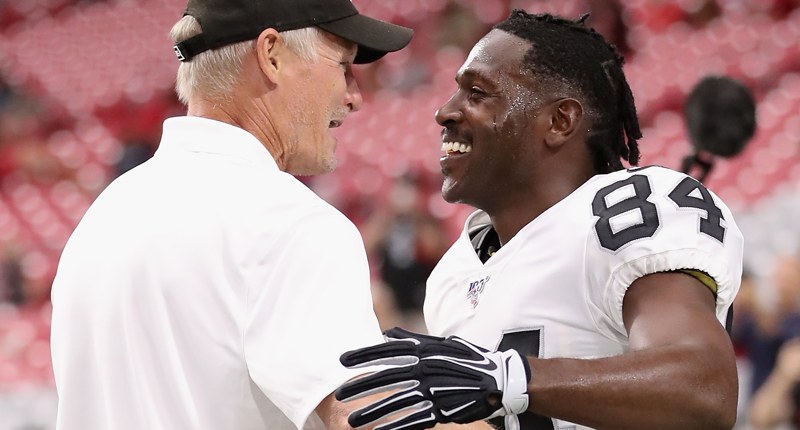 The Antonio Brown saga has come to an end with the most logical final destination for the talented, but troublesome receiver:

ESPN’s Adam Schefter reports Brown lands in New England on a one-year deal that includes $9 million guaranteed and could be worth up to $15 million. I presume that for Brown will need to be on his best behavior, reach some stats-based incentives, and possibly land some roster bonuses in order to go from $9 million in guarantees to reach the total value of $15 million.

Brown cost himself nearly $30 million in guarantees by acting a fool this offseason, with the latest events being laid out earlier today by Brett. But to go from not getting a paycheck from the Raiders to getting $9 million to catch passes from Tom Brady alongside Josh Gordon and Julian Edelman is a pretty sweet consolation prize. Of course, the Raiders had to release him first for that to happen. And as you would expect, Brown’s reaction was priceless:

Here’s Antonio Brown finding out the Raiders released him: pic.twitter.com/nP4AZUh84s

When Brown is on the field, he is one of the best receivers in football. Brown has averaged 114 catches, 1,524 yards, and 11 touchdowns since the start of the 2013 season. In that time he has made six Pro Bowls and earned a spot as a first-team All-Pro member four times. Now, all that talent and play-making ability is set to join noted football mastermind Bill Belichick in pursuit of another ring. How 30 other NFL teams let this happen so quickly is beyond me, but it is what it is.

Naturally, the Patriots play host to the Steelers tomorrow night. But no, Brown won’t be playing. Because of the timing of his release and signing, Brown is ineligible to play in Week 1. So if you’re waiting to see what Brown looks like in a Pats uniform or wanting to put him in your fantasy lineup, you’ll have to be patient.