Tarik Cohen Spent His Thursday as a Wide Receiver, and That Ain’t It Skip to content 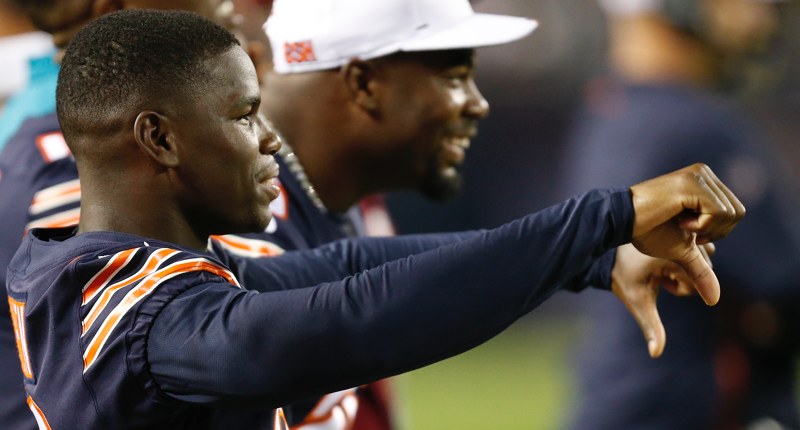 Losing to the Packers in Week 1 left Bears fans searching for answers and asking questions.

Where is the offense? What happened to Mitch Trubisky taking the next step? When will the running game get a chance to establish itself? Does Matt Nagy even want to score points? There were more, but I’m limited by time and space. If I had to pick one question that continued to rattle around my head all weekend, though, it would be this … Is Tarik Cohen a wide receiver now?

Cohen was given a carry on the first play of the season, a well-designed and well-blocked toss left that should have gone for a huge chunk of yards had he not fumbled it. A penalty on the play wiped it off the books altogether. But after that, we didn’t see much from Cohen out of the backfield. As it turns out, it is because he didn’t spend too much time in the backfield.

Remember when the Browns out of nowhere played Duke Johnson as a receiver a couple of years ago?

Bears basically did the same thing with Tarik Cohen yesterday.

Sam Monson of Pro Football Focus points out that 44 of the 46 snaps Cohen was on the field for saw him lined up as a wide receiver, either in the slot or on the outside. That is an alarmingly high percentage, and frankly, a surprise to anyone who watched the game or dove into the numbers afterward.

It was probably a surprise to Cohen, too. Because when talking to SiriusXM NFL radio in the offseason, Cohen talked about how he did a little bit of everything last year and expected more of the same for the 2019 season: “My role is not going to change. I still have to be the receiving back, come in be the change of pace back, running the ball, be that speed guy. I’m just prepared for anything.”

Putting Cohen on the field with David Montgomery and Mike Davis should keep defenders from keying in on what the Bears want to do offensively, but lining up Cohen solely as a wide receiver is borderline malpractice. Cohen is a bigger threat to opposing defenses when his role is unpredictable. But if he is a straight up wide receiver and not a running back who can catch passes out of the backfield, that changes how defenses attack Chicago’s offense.

The folks at ESPN’s NFL matchup highlighted the top performances for running backs who racked up receiving yards in Week 1. Check it out and find a familiar face:

Having a running back who can make catches out of the backfield is a solid addition to a team's pass game! Here are the RBs with the most rec. yards after Sunday's matchups. #Chargers #Panthers #Titans #Redskins #Patriots #Cardinals #Bears #Steelers #Bengals @NFLMatchup pic.twitter.com/9L2NlTmNzS

Naturally, you’ll find Cohen making the cut here. But what stands out is his painfully low yards/catch number. Cohen averaged 10.2 yards per reception last year, so averaging 6.1 yards per catch in Week 1 is far from great. In fact, it is below the 6.7 yards per catch he averaged as a rookie in an offensive scheme we couldn’t rid ourselves from fast enough.

Remember, this is how the Bears deployed Cohen last season:

Cohen lined up everywhere last season, splitting time at running back (63.9%), slot receiver (20.7%), and wide receiver (13.3%). That the Bears lined Cohen up at fullback (0.6%) and tight end (0.4%) only added to the potential mismatches he created by simply being on the field and put in a spot where he could make a play.

Using Cohen as a position-less hybrid flex player is a fine idea, as is using him as a traditional change-of-pace running back. Both roles take advantage of Cohen’s unique skill set, while minimizing the risk of over-exposing him to big hits that could take him out of action. But using him strictly as a wide receiver doesn’t seem ideal for him or the offense as a whole.