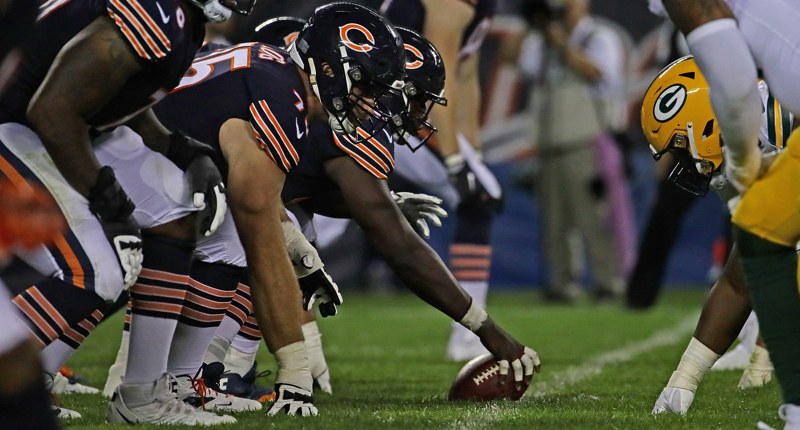 The Bears’ offensive line play was problematic in Week 1 (to say the absolute least). But even as external reinforcements could be on the way – more on that in a second – most of the expected improvement must come from within.

Even Head Coach Matt Nagy acknowledged as much:

But don’t take his word for it, the numbers speak for themselves: Left tackle Charles Leno Jr. (50.6) earned Pro Football Focus’ fourth-lowest grade among offensive tackles last week, while right tackle Bobby Massie (61.8) checked in at 20th (among the 43 qualifiers). The guard play wasn’t much better, as Cody Whitehair (54.4) and Kyle Long (51.2) earned two of PFF’s 10-worst guard grades from the first week of the season. And by the grading standards set forth by the analytics giants, only James Daniels is worth talking about positively (70.2 grade, 2nd best among centers).

Overall, the group put up a stinker against the Packers.

Among the most troubling aspects of the poor offensive line play is that this is the same group that graded out highly last season and projected to be great again in 2019. Continuity tends to breed excellence when it comes to offensive line play, so what gives?

The only change within that group came with Whitehair and Daniels swapping positions and returning to the spots they were originally drafted to play in the NFL. It’s difficult to imagine the swap as the source of the awfulness, but I suppose it can’t be ruled out.

To that end, if you’re thinking maybe some new blood can help get them back on track, the Bears are already ahead of you: NFL insider Aaron Wilson tweets that Chicago is hosting offensive lineman Brandon Hitner for a workout after the poor showing in Week 1. Hitner, who had signed with the Rams as an undrafted free agent, played his college ball at Villanova, where he played both guard and tackle. But while he’s an intriguing prospect with some legitimate upside (just check out his NFL Draft profile), there’s also a reason he’s available right now.

In any case, this group (and whoever’s added to it) needs to get it together if Mitch Trubisky and the offense are going to take off. Because, I mean, come on … this is unacceptable:

Stuff like this cannot happen early in a game. This play killed a drive where the Bears were on the Packers side of the field. Hard to give a grade on them without the coaches film yet, but there were clearly too many mistakes by the offensive line. #Bears pic.twitter.com/jhcHgAsfwS

And this thread goes a long way toward showing all the things that went wrong up front:

Communication was the big issue. Watch Kyle Long and Bobby Massie make a check on the right side before Blake Martinez steps into the A gap and rushes free to the QB.

They need to be on the same page as James Daniels pic.twitter.com/dTKZFKNEnw

Between the penalties and missed assignments, it looked like they were playing together for the first time. And even though the Packers’ defense deserves credit for mucking things up and pushing the Bears back, this group has proven to be better in the past. And needs to be better in the future.