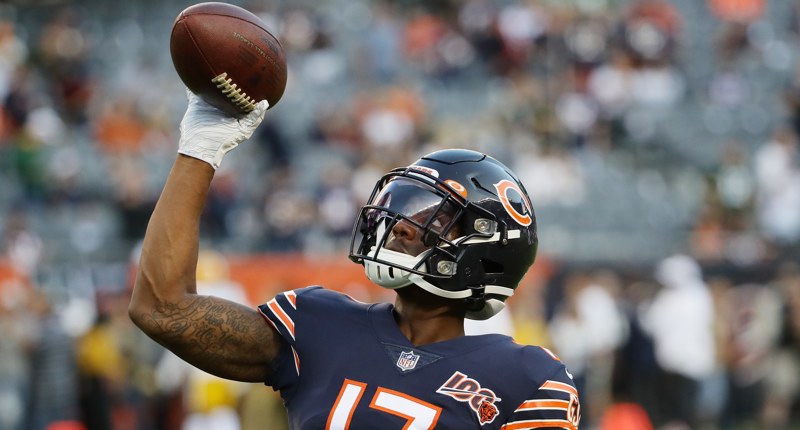 There was plenty of buzz surrounding second-year receiver Anthony Miller entering the 2019 season, but Miller was on the field for just 22 percent of the team’s offensive snaps in the Bears’ Week 1 loss against the Packers.

Further, Miller (16 total offensive plays) was out-snapped by fellow receivers Cordarrelle Patterson (20) and Javon Wims (21). Not only was that unexpected, the total number of snaps were far fewer than what was expected out of Miller entering the game. A second-year receiver with an All-American pedigree and a full year of Matt Nagy’s offense under his belt probably should have been on the field more in Week 1.

If you were curious as to what happened with Miller in Week 1, you were not alone. WGN Radio’s Adam Hoge caught up with Bears Wide Receivers Coach Mike Furrey, who provided an explanation as to why Miller did not play as much as expected.

It was surprising to see Anthony Miller only play 16 snaps on offense (22%) in Week 1. So I asked #Bears WR coach Mike Furrey about it. Here’s his answer: pic.twitter.com/0vGIVO2j5A

A few things stand out in Furrey’s explanation.

It is fair to point out that Miller missed considerable time in OTAs (while recovering from offseason shoulder surgery) and the preseason practice period (recovering from an ankle injury suffered at the end of training camp). Perhaps our expectations entering the season-opener should have been tempered a bit. After all, expecting Miller to take on a full workload in Week 1 knowing that he wasn’t a full participant throughout the offseason training period would have been unfair. But still … Miller was a full participant in practices leading up to the lid-lifter, so it is understandable why pre-season forecasts would have projected a larger snap-share for the Memphis product.

Ultimately, the Bears gave Miller what he was comfortable with in his first game action since January. It was just 22 snaps, none of which included Miller getting a ball thrown in his direction. Furrey seems to have a sense of cautious optimism heading into Week 2, but I will take a wait-and-see approach now that it is clear that Miller was slowed down during the offseason.

While exercising patience regarding an on-the-mend Miller is sensible, I have an issue with another part of Furrey’s answer that doesn’t allow for much satisfaction. Because in addition to a reasonable explanation for a lack of snaps for Miller, Furrey said: “A lot of it was some stuff that we had set for (Tarik Cohen).”

Cohen spent 92 percent of his snaps lined up as a receiver in the slot or on the outside. That is a ridiculously high number and far more than what was expected. Yesterday, we discussed how Cohen was more properly deployed last season as a multi-faceted threat who lined up at a variety of different positions. Last week’s usage wasn’t it, but if that was part of the bigger offensive plan, that seems problematic and counterproductive to re-creating what was successful in 2018. But if Cohen’s extreme usage as a receiver was out of necessity because Miller couldn’t give it a full go, then that would represent a more logical explanation to the situation.

In the end, the Bears need Miller on the field with Cohen (and others). Miller’s seven touchdown receptions led the team and represented the second most among rookie receivers. More importantly, Mitch Trubisky posted a 117.0 passer rating, averaged 8.0 yards per attempt, and put up a 6-1 TD-INT ratio when targeting Miller last season. The more trusted pass-catchers there are for Trubisky to target, the better the odds of an improved performance against the Broncos in Week 2.