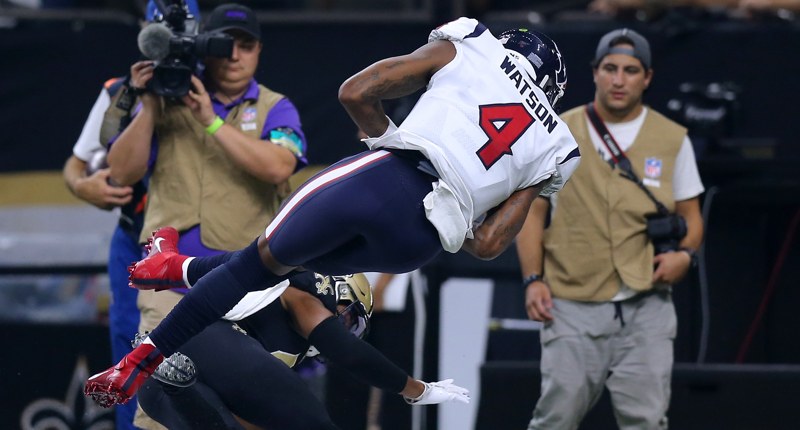 Raise your hand if you’re already over fantasy football season.

Don’t be shy. I’m already there, too.

Just insane. Here are the final two drives of the Saints vs. Texans via @thecheckdown pic.twitter.com/TIDKw7ejnO

Breaking: ESPN is switching away from the new Down-And-Distance graphic it debuted in the first half of Monday Night Football. ESPN heard the fans’ feedback and acted, quick.

How much of a failure was ESPN's new MNF gfx pkg? They've already modified it for the second half. pic.twitter.com/r9yJI4bytJ

ESPN's coverage classification is powered by NFL Next Gen Stats.

Raiders fans chanting “F— AB!” after each of their touchdowns and I have to say, as much as this stadium resembles the Star Wars cantina, I’m digging it because it’s one of the few places left in sports that’s raw & real. Not a bunch of corporate ticket holders glued to phones.

A look at the top-5 grades on defense for the #Bears from last night. pic.twitter.com/SdZ9DcNLRT

3rd year pro Roy Robertson-Harris was the most disruptive player in the Bears front this past week. I had never really watched him before but he was everywhere & played with his hair on fire in this one.

@zpearson23 spoke about the strong reaction to the Bears' season-opening loss on Sports Feed on Monday, and whether there is a reason for legitimate concern. See his full conversation with @paytonsun & @joshfrydman by clicking on the link in the bio. . . . #bears #chicagobears #nfl #football #packers #greenbaypackers #nflweek1 #nfl100

#Bears brought in 4 offensive linemen for a tryout today:

#Bears HC Matt Nagy on moving on from Week 1 loss: "You identify the problem, you fix it and you move on. You don't dwell on it."

The contract had a $6M signing bonus and includes $27.526M guaranteed.

The Minnesota Vikings are introducing a new space at U.S. Bank Stadium for fans with autism, Down syndrome, PTSD and other conditions that may require a calm, quiet place during games. (@MPRnews) https://t.co/dJbRuj4qT4