Adjustment-Time: The Packers Used Speed to Stop the Bears' Offense in Week 1 Skip to content 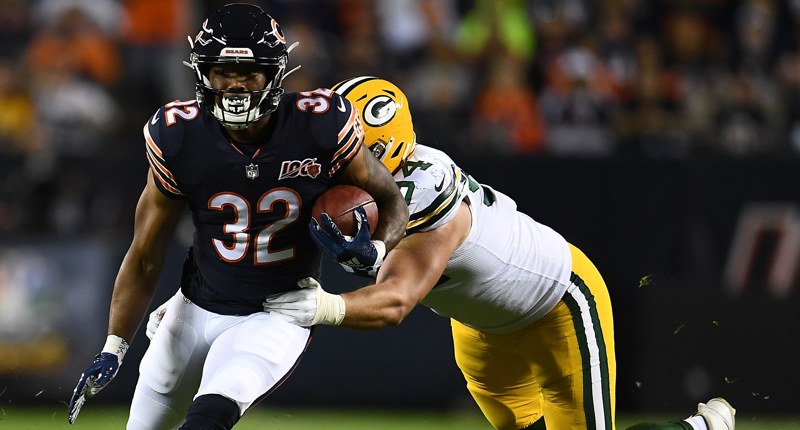 While NFL offenses are busy being copycats, defenses are obsessively in search of a counter-punch to combat the growing offensive threats.

Last year, Bears Head Coach Matt Nagy used speed and scheme to create opportunities for his then second-year quarterback to succeed. And in 2018, Mitch Trubisky did just that by throwing for more than 3,200 yards, posting a 24-to-12 touchdown-to-interception ratio, tacking on more than 400 rushing yards, and three scores. The speed aspect of the Bears’ offense made them tough to stop, even when the quarterback wasn’t playing at a high level. But it appears that teams are a bit more prepared for the Bears this time around.

Check out NFL analyst Brian Baldinger underscore how the Packers used a unique formation to foil the Bears’ offensive attack:

1 linebacker + 6 defensive backs = golden ticket for the @packers last night. @BaldyNFL believes they kept up with the speed of the Bears offense 👇

Green Bay shut down Chicago with a dime look that featured six defensive backs and just one linebacker. Using this as a base formation, the Packers were able to successfully fill passing lanes with able-bodied defenders who could also limit rushing attempts by using speed to get to the point of attack.

Steven Ruiz of USA Today offers up that Green Bay’s use of this defensive tactic could provide the blueprint that could slow down some high-octane offenses. Coaches who are too stubborn to change their ways, quarterbacks who are unable to successfully adjust on the fly, and teams that are ill-equipped to use personnel to throw in a wrinkle are going to be susceptible to falling prey to these new-found speedy defenses. And based on what we witnessed in Week 1, the Bears fall into the first two categories described in the preceding sentence.

Nagy’s non-adjustments hindered Chicago’s offense, while Mitch Trubisky’s inability to properly read what was the defense was giving him were key factors in a woeful offensive performance. Sure, it wasn’t all on Nagy’s play-calling … but the last two games of consequence played by the Bears have featured far more pass plays (88) than rush attempts (32). In short, a 2.75-to-1 pass-to-run ratio is an imperfect balance for an offense.

At least the Bears appear to be well-positioned to bounce back with a counter-move to what defenses will probably throw in their direction moving forward.

It starts with an offensive line – which, despite last week’s disappointing performance – excelled at run-blocking just a year ago. From there, Chicago has three backs who aren’t easy to bring down and have unique skill sets that can be showcased out of a variety of sets and formations. Incorporate a play-caller who was calling shots when Kareem Hunt powered his way to a rushing title as a rookie and a quarterback more known for his ability to make plays with his feet, and the Bears should have no excuse not to run through teams. And if they can do it successfully, it should open up passing alleys across the middle and over the top.

Last year, we highlighted how well Trubisky threw, when executing play action. And while part of me wants to give into my meatball urges and push the idea of running the ball down the throats of defenses who set up in a base dime formation, there isn’t a tactical advantaged to be gained by doing so. Instead, a healthier run-pass balance, coupled with the simple threat of a run fake can often be enough to open up passing windows that wouldn’t otherwise be there.

A little bit of balance here and there could go a long way toward straightening out an offense that Allen Robinson believed was fixable within a week.