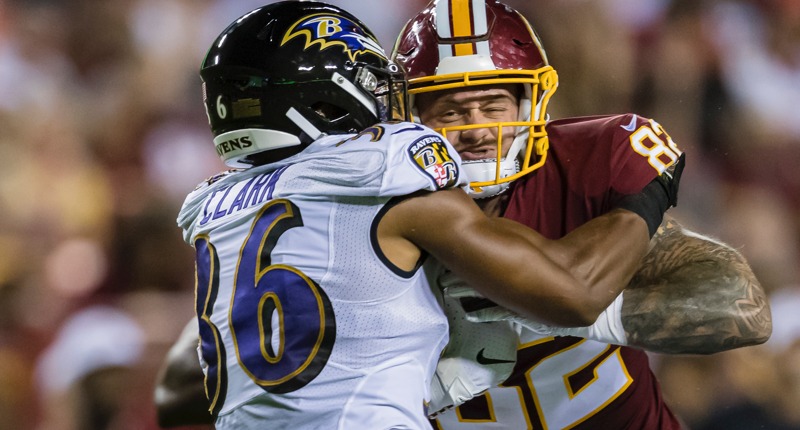 The Chicago Bears have a new tight end in their mix:

#Bears roster moves:
We have waived DL Abdullah Anderson and have been awarded via waivers TE J.P. Holtz.

J.P. Holtz, come on down! You’re the next participant to walk through the revolving door of tight ends at Halas Hall!

The Bears claimed Holtz off waivers from Washington after being let go on Tuesday. It has been a whirlwind few weeks for Holtz. Washington waived him as part of the team’s final round of roster cuts on August 31, signed him to the practice squad a day later, called him up to the big club on September 7, then waived him three days later. Now the Bears have Holtz on their team after winning a waiver claim, adding him to a tight ends room that features three healthy bodies (Adam Shaheen, Ben Braunecker, Bradley Sowell) and an injured starter on the mend (Trey Burton).

To make room for Holtz on the roster, the team waived defensive lineman Abdullah Anderson.

When you see the Bears sign a tight end from the waiver wire, it is natural to make the connection that something is happening regarding Burton’s status. At minimum, the timing is curious. But it is possible this transaction is aimed at helping back-end position depth. Holtz did not play an offensive snap for Washington in Week 1, but did play 14 special teams snaps. And for what it’s worth, Holtz crossed paths with Bears Special Teams Coordinator Chris Tabor when he was running the third phase in Cleveland in 2016 and 2017.

Chicago now has five tight ends on its roster, which seems like plenty. Then again, having that many players at that particular position hints that the team is not all that happy with the players already in house.