Trey Burton Is "Humbled" and "Frustrated," But Hopes to Play on Sunday Skip to content 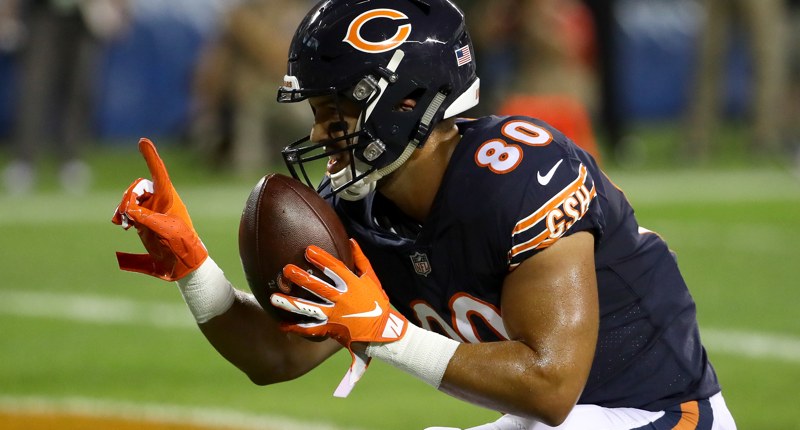 If you feel like you are the only one playing the waiting game when it comes to the status of Chicago Bears tight end Trey Burton, you are not alone.

But don’t think for a minute that Burton isn’t taking his absence harder than anyone. So while we await an update on Burton’s practice participation and pending status for Sunday’s Week 2 game against the Broncos, just know that sense of anticipation also surrounds the tight end himself.

“We’re taking it day-by-day,” Burton said, via the Bears’ official website. “I’m hoping by Sunday I’ll be good. Every day is a different day and some days I feel really good and some days I don’t feel good at all. It’s been a very humbling process. Today I’m feeling good. [But] it’s been extremely frustrating.”

Burton isn’t a mauler in the blocking game or a game-changing receiving option as a tight end, but he is still a key member of Matt Nagy’s offense. The “U” tight end has a variety of responsibilities, all of which Burton did well in his first year with the Bears. There were times when he stretched the field with vertical routes, worked across the middle, settled into a zone and served as a safety blanket, chipped pass-rushers at the line of scrimmage, and sealed the edge as a run-blocker. That Burton can do all of those things well enough means defenses can’t key on him as a receiver, nor can they afford to lose track of him when he engages as a blocker because he can easily slip out of that and turn into a pass-catcher.

Feelings of frustration are understandable for Burton, who hasn’t played since the 2018 regular-season finale against the Vikings. Since then, he has missed a playoff game due to a groin injury, had to combat chatter questioning if the injury flared up because of anxiety issues, gone under the knife to receive sports hernia surgery to repair that issue, missed OTAs, and returned for training camp … only to suffer another groin injury that was serious enough to keep him out of the 2019 season opener. And yet, hope for a speedy return is still real despite the many setbacks that have brought him to this point.