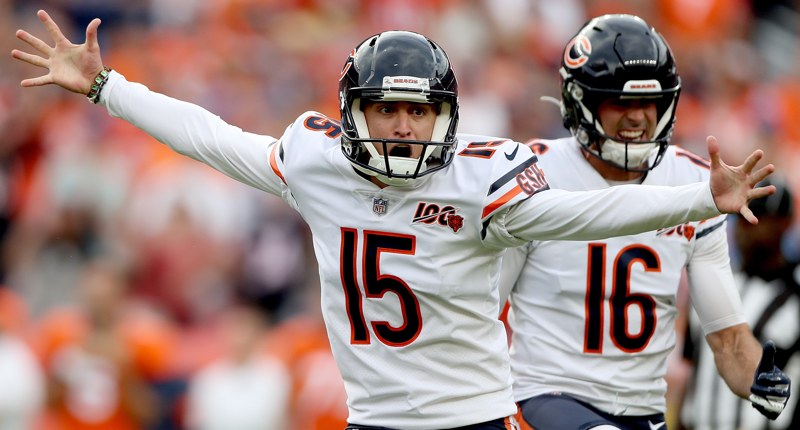 As if there was any doubt as to who was going to win the NFC’s Special Teams Player of the Week award for last week’s performance:

EDDY! EDDY! Congrats to the NFC Special Teams Player of the Week!

Of course Eddy Piñeiro was named Week 2’s NFC’s Special Teams Player of the Week for what he did in the Chicago Bears’ 16-14 win against the Denver Broncos. Piñeiro nailed all three of his kicks, including two from 50+ yards.

And that game winner … we just can’t get enough of it. So let’s re-visit it one more time.

Gather around, friends. Let’s give it another watch:

Good morning. On a loop, all day: pic.twitter.com/iej8f43F3t

Don’t act like I was the only one who had a tab on my browser dedicated to letting that kick play over and over again. For as often as Bears fans had to re-visit the double-doink, I believe that was reason enough to obsessively re-watch Piñeiro’s game-winner. Gosh! Feeling positive vibes about a Bears kicker gives me the warm and fuzzies.

The same can be said about these reactions:

What a moment for Piñeiro and his teammates! And check out Piñeiro having a moment with Head Coach Matt Nagy and Special Teams Coordinator Chris Tabor. Those three have been through a lot this year … and we are only in Week 2 of the regular season. Remember all the things that needed to happen before Piñeiro even made it as the Bears’ kicker. They had to trade with the Raiders, he had to win a summertime competition, and still had to sweat out late summer cut-downs before being named the team’s Week 1 kicker. No wonder Nagy and Tabor were as emotional as they were in those first moments after a victory. Sunday’s win was something that was months in the making.

An old Brent Musberger quote comes to mind: “You know what? There are some folks who are celebrating. And others who are saying: ‘you’ve got to be kidding me.’ There are some numbers crunchers. … Oh my goodness.”

To the victors go the spoils (and the postgame interviews):

Kickers get calls too! 🏈📞

After his HUGE game-winning kick for the @ChicagoBears, @EddyPineiro joined @DeionSanders 👇

I wonder how much it pained a Florida State guy (Deion Sanders) to shower a Florida guy (Piñeiro) with some real love.

Khalil Mack had the best reaction to the kick and I will hear no arguments to the contrary:

Khalil Mack on Eddy Pineiro: “He came out and nailed that motherfucker.”

The only thing as good was a thought from Eddie Jackson before the kick:

As Eddy Pineiro lines up for game-winning field goal, Eddie Jackson says he was telling #Bears teammates: "Eddy is going to be legendary. Watch this."

Legendary, eh? I don’t want to think about the alternative universe in which Piñeiro misses the kick, but you know as well as I do that Jackson wouldn’t have used that word had the kick clanked off an upright, sailed wide, or fallen short. But since we don’t live on an alternate timeline, we won’t go there. Instead, we should highlight what Jackson said and note how he had enough confidence to say *BEFORE THE KICK* that Piñeiro was about to do something special. As we learned last year, desired results can happen when you try to speak them into existence.

Piñeiro has any number of nicknames he can go to moving forward:

I’ll be honest when I say El Conquistador is the best nickname anyone is going to give Piñeiro. So kudos to punter Pat O’Donnell for putting that on our radar.

Days have passed and I am still not over how Sunday’s win against the Broncos was a lot like the playoff game against the Eagles from last January. The Bears held a halftime lead in what was a surprising defensive struggle, trailed with less than one minute to play (coincidentally, the Broncos’ two-point conversion play was strikingly similar to what turned out to be the Eagles’ game-winning touchdown play on fourth down), got an unexpected lift in the form of a huge throw from Mitch Trubisky to Allen Robinson, and it all set up a game-winning field goal attempt. The similarities are too real to ignore. But the difference was that Piñeiro made it in the end. So if you’re wondering why Bears fans are walking around as if demons were exorcised last week in Denver, it’s because they were.

I was hesitant to jump on the bandwagon of folks who claimed the Bears had found their kicker after he provided the only scoring in Week 1. But a day that featured two 50+ yard kicks and all that swag is a good start to sway me from my position. I still want to see Piñeiro continue to show his consistency as a field goal kicker and on kickoffs with more booming touchbacks. As long as Piñeiro continues to deliver, his fan club will only continue to grow. So while we don’t know what his future holds, it gives us all the more reason to celebrate what we have now — a kicker who hasn’t driven us bonkers yet.

And here is to more Special Teams Player of the Week Awards in No. 15’s future.