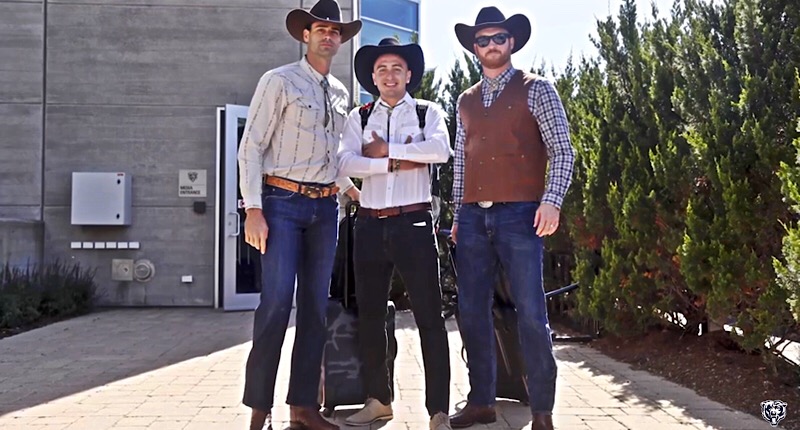 Special teams units can be a quirky bunch, but they are often one of a team’s most tight-knit groups.

And when a group that is close has some unique characters on it, you get stuff like this:

Meet “Los Tres Caballeros” of the Chicago Bears’ special teams unit, which is enjoying its time in the limelight after their praiseworthy performance in a 16-14 win against the Denver Broncos.

Eddy Piñeiro has a few fun nicknames after drilling the 53-yard game-winning kick. The coaches call him El Conquistador, fans have given him the nickname Eddy Dinero (which translates into Eddy Money in Spanish), but the most important revelation is the proper pronunciation of his last name. Pineiro and Piñeiro are two different pronunciations, because “ñ” and “n” are two different letters. Shoutout to Eddy for providing that clarification.

Pat O’Donnell doesn’t have an “enye” in his name, but he did have a 75-yard punt last week. O’Donnell already has 13 punts in two games, but his 48.3 yards per punt average represents a career best to this point. And while Bears fans would like to see less of him (because fewer punts generally means more touchdowns), it is good to see him excel to this point.

Patrick Scales is the long snapper who often gets overlooked because … seriously, it’s a long snapper. But without proper snaps, Piñeiro and O’Donnell wouldn’t get their chances to shine in the kicking game.

There has been so much stress put on the importance of getting the special teams right. And while finding the right kicker has been a point of emphasis, the Bears’ special teams unit struggled as a whole last year. But perhaps a little bit of early-season fun will allow a group that might have been feeling the weight of the world on their shoulders throughout the offseason breathe a little easy for now.