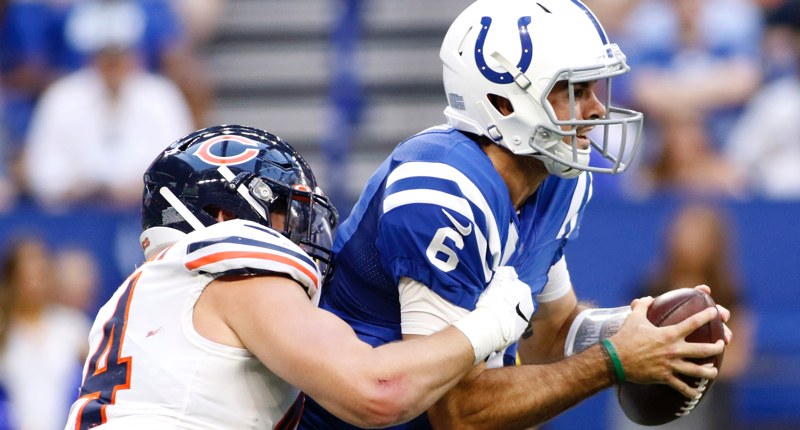 An intriguing developmental quarterback prospect is set to enter the market, and he just so happens to be a guy the Bears have gotten a good look at over these last two years.

We have waived QB Chad Kelly.https://t.co/uJBtYtbXTc

Our original post discussing Kelly and the idea of finding a developmental quarterback can be found below:

Kelly (a.k.a. Mr. Irrelevant in the 2017 NFL Draft) has a unique NFL bloodline, as the nephew of Hall of Fame quarterback Jim Kelly. However, off-field issues dropped his stock when he was in college at Ole Miss and they haven’t totally gone away (he’s been released by not one, but two teams within the first three years of his career). Indeed, Kelly served a two-game suspension to start the season, and the Colts – with Jacoby Brissett and Brian Hoyer already on the roster/under contract on multi-year deals – clearly had no room for him. So … how about it, Bears?

Having played the Broncos in the 2017 preseason (when Kelly was passing Paxton Lynch on the depth chart) and in August 2019 (when the Bears traveled to Indy to play the Colts in the preseason), the Bears should have seen enough of Kelly to have a decent feel for his talent by now. But even if that weren’t the case, Pro Football Focus’ analytical minds circled Kelly as a player the Bears should consider taking in the later rounds of the 2017 draft. At that time, Kelly was PFF’s seventh-highest-graded college quarterback with a 92.12 rating. Not bad! The Bears have since seen Kelly plenty though, and the 74 percent completion rate, 8.0 yards per attempt, and 94.7 passer rating in the preseason could have left a positive impression.

To be clear, signing (or merely being interested in) a player like Kelly does not have to be a perceived as a move that shows a lack of faith in Mitch Trubisky’s future. Instead, it should be viewed as an investment into the future of the position. Chase Daniel is in the final year of his two-year contract and Tyler Bray is on the practice squad, but the Bears have no quarterbacking prospects beyond those two.

At a minimum, it would be prudent to at least consider an alternative option who could be a long-term solution as a reserve who could possibly produce in a pinch off the bench in a backup role. Maybe it is Kelly. Maybe it isn’t. But it wouldn’t hurt to always have an eye on a talented prospect who