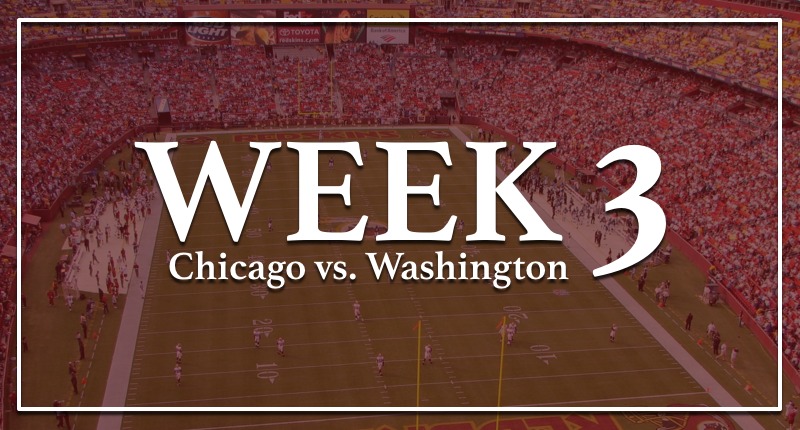 It felt like a weight was lifted off the collective shoulders of Bears fans when Eddy Piñeiro’s 53-yard boot split the uprights in Week 2 of the NFL season.

High-fives were exchanged. Friends were embraced. Celebratory shots of Malört were ordered. And demons were exercised. Indeed, it was a pretty big deal, but we know that the Bears can’t coast off that win any longer. A new challenge emerges in our nation’s capital, and this feels like a good time to take advantage of a sub-par team to move above .500.

If the Bears can pull it off, it will come at the expense of some familiar faces. Washington is loaded with ex-Bears (linebacker Jon Bostic, punter Tress Way), long-time Bears tormentors (running back Adrian Peterson, quarterback Case Keenum), and players who were projected Bears draft targets (remember when drafting Jonathan Allen was going to be a thing?) who ended up going elsewhere.

The Westgate SuperBook in Las Vegas lists the Bears as 4-point favorites with an over/under set at 41.5. Chicago is 4-3 in standalone prime-time games (i.e. MNF, TNF, SNF, Thanksgiving) under Head Coach Matt Nagy. This makes for an interesting test for the Bears.

Chicago trails Washington 23-26-1 in all-time meetings, which includes postseason play. The Bears have lost seven straight and has not won a road matchup since 2001. In that game, Brian Urlacher caught a touchdown pass from Brad Maynard on some special teams trickery. You can check out the box score here.

Location: FedExField (Yes, that is the correct style. No, it doesn’t look right, but that is very on brand for this franchise.)

Bears Offense: David Montgomery scored the Bears’ first regular-season touchdown of 2019 and should be looking for more. In Week 1, Washington allowed Jordan Howard to rip off runs at a 7.3 yards per rush clip (6 carries, 44 yards) and Darren Sproles to go off and average 5.2 yards per carry (9 attempts, 47 yards). A week later, Ezekiel Elliott blasted through the defense for 111 yards on 23 carries. This should be an opportune time to establish a ground-and-pound attack that could ultimately free up some over-the-top throws and bootleg runs from Mitch Trubisky.

Bears Defense: Prince Amukamara figures to be the primary defender against Washington’s best receiver (more on him in a bit), which should be a heck of a challenge for the savvy veteran. Amukamara remains a physical bump-and-run defender in Chuck Pagano’s scheme, just as he was when Vic Fangio was running the show. Perhaps a little physical action can take Washington’s top pass-catcher off his routes and force the passing attack to go elsewhere. If not, Ha Ha Clinton-Dix and Eddie Jackson could have a busy night ahead of them.

Washington Offense: Terry McLaurin is a rookie receiver with speed to burn and a ton of big-play potential. Not only has the Ohio State product has already grown into Case Keenum’s favorite target, the connection has kept him on the field for more than 90 percent of the team’s offensive snaps. For what it’s worth, we thought McLaurin would have been a nice sleeper pick for the Bears had they been in the market for a mid-round receiver. But by the time the Bears turned to drafting a receiver, McLaurin had already been drafted.

Washington Defense: Landon Collins is a playmaker who always seems to find his way into making a tackle. Collins was a first-team All-Pro as a second-year player in 2016 and has made the Pro Bowl in each of the last three years. Washington swiped Collins from the rival Giants by handing him a game-breaking six-year deal worth up to $84 million and included $45 million in guarantees. I fully expect Collins to talk to fellow Alabama Crimson Tide products Eddie Jackson and Ha Ha Clinton-Dix on what it takes to secure the bag.