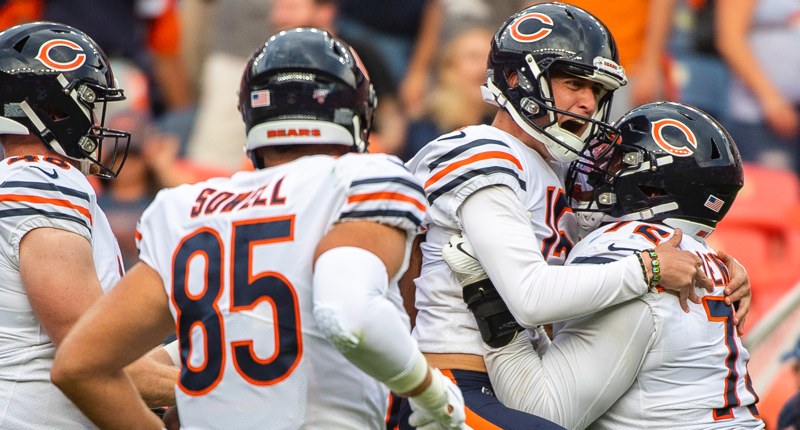 Matt Nagy’s “Be Obsessed” mantra resonated from the time he arrived to coach the Bears in 2018 and permeated throughout his team in a magical 12-win season that saw Chicago go from division cellar-dwellers to kings of the NFC North.

This season, the Bears opened with the idea of “Chasing Great” as they set last yer’s disappointing finish in the past to move on and put their eyes on something more than a division championship and playoff berth.

But as is often the case, a contrived slogan is nowhere near as good as one that comes naturally.

Nagy and the Bears have a new rallying cry, and it fits this team like a glove:

1 second, and the ball ⁠— That's all @EddyPineiro and the @ChicagoBears needed to pull off a dramatic victory in Denver.#NFLTurningPoint pic.twitter.com/0hkFR78S3B

“One second and the ball — that’s all we need.”

Before beating the Broncos in one of the wildest finishes you will see on this season, the Bears found inspiration in the Monday Night Football lid-lifter between the Saints and Texans. If you’ll recall, that game featured a handful of late-game lead-changes and a wild flurry of events that sealed it as an instant classic. There was a game-tying touchdown by the Texans, a missed extra-point that would have given the team the lead, a penalty by the Saints that allowed for a re-do, a successful re-try, and the Saints marching 35 yards in six plays to set up a game-winning 58-yard field goal. Mitch Trubisky had six fewer seconds to work with than Drew Brees, but the idea remained the same — so long as there is one second on the clock and your team has the ball, you have a chance to win. It is one thing to say it, but something else to do it. The Bears did it, which is the difference between rolling into this upcoming Monday Night Football game against Washington with a 1-1 record and limping in after an 0-2 start.

In the end, the Bears showed a special amount of resolve in winning against the Broncos. Everything was working against them that afternoon. They had a struggling quarterback, lifeless offense, tired defense, and decades of history working against them last Sunday. And yet, with time and possession, they wrote their own history. Should Chicago continue to keep this mindset, it is easy to believe that good things will continue to happen for them moving forward. After all, they just need one second and the ball.