What Can the Bears Do If Eddy Piñeiro Can't Kick Monday? Skip to content 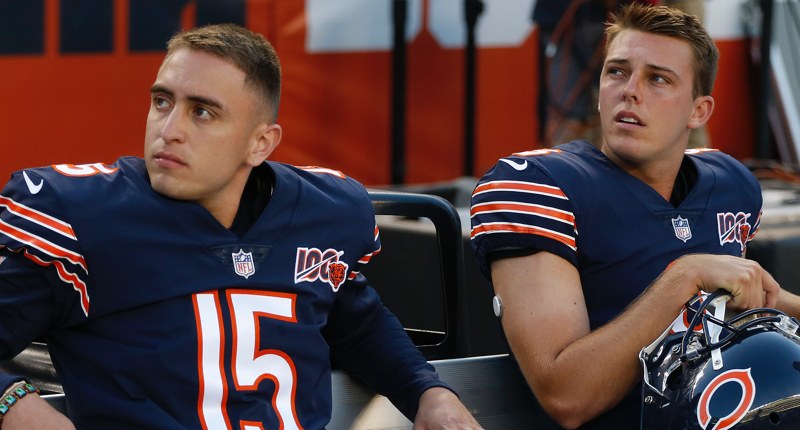 The Chicago Bears are staring at their first major injury of the 2019 season and could be forced to finding solutions to a short-term problem.

Place-kicker Eddy Piñeiro is the team’s leading scorer and is listed as questionable for Chicago’s Monday Night Football showdown against Washington. Because it is only right for a kicking problem to pup up as the Bears enter a prime-time game in Week 3 after feeling like the team had finally found a solution to a long-standing problem.

If Piñeiro cannot kick on Monday, a new set of problems will arise. Beyond the obvious field goal opportunities the Bears would have to pass up, the special teams’ kickoff unit would have to be turned over to punter Pat O’Donnell. Bears Head Coach Matt Nagy insists on the injury being “minor” and that the team will exercise caution while maintaining optimism that he can kick on Monday.

But what if he can’t?

O’Donnell had place-kicking experience as a high school student athlete. And in a piece written after the 2014 NFL Draft, Larry Mayer of the Bears’ official site notes that O’Donnell made seven field goals as a high school. However, I feel as if O’Donnell handling field goal opportunities would be a break-glass-in-case-of-emergency type of last-ditch effort. It certainly did not sound like it would be Nagy’s top option.

If the situation is truly dire and the Bears insist on fielding a team with a field goal kicker, the team could turn to Elliott Fry in a pinch. Fry is a free agent who spent time with the Ravens at the end of the preseason, and has gone on to have tryouts with the Titans, Jets, and Colts since leaving the Bears. It isn’t as if Fry didn’t hold his own in the Bears’ kicking competition, and it is worth pointing out that he didn’t burn any bridges on his way out the door. So a Fry return could be conceivable if necessary. But for that to happen, the Bears would have to waive a player to clear a roster spot. I’m not sure that makes much sense, unless the injury is expected to keep Piñeiro out for an extended stretch of games.

The most outside-of-the-box idea could be to scrap kicking field goals and extra points altogether, which could allow Nagy to get more aggressive with play-calls. Could some new-fangled two-point conversions be in the Bears’ future? I mean, they’ll have to get into the red zone, then score touchdowns for that to even happen. But it’s fun to think about as an alternative … even if we would rather have a healthy Piñeiro kicking.