Mitch Trubisky Will Get a Chance to Prove Himself in Prime-Time, But Outsiders Have Their Concerns Skip to content 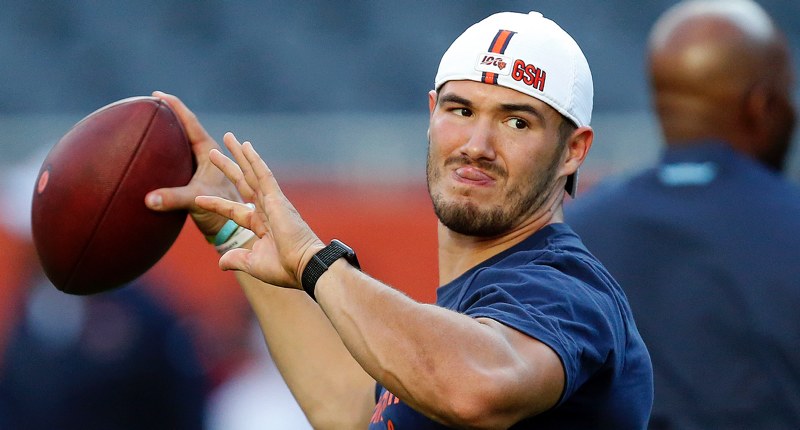 The last time the Bears were preparing for a prime-time matchup, there was hype flowing from so many different directions that I hardly knew what to do with myself.

Between (1) navigating a busy and productive offseason, (2) enduring the lengthy layoff between games, (3) opening the league’s centennial season (in a place generally reserved for the reigning Super Bowl champion), and (4) dealing with the usual buzz that comes with a Bears-Packers game, there was just so much on everyone’s plate. But things are different now, and not just because Chicago is 1-1 either.

The Bears buzz has been cut by Mitch Trubisky stumbling out of the gate.

In conjunction with ESPN, Pro Football Focus’ Cam Mellor circled the weakness of all the starting quarterbacks in the NFL. And while there isn’t an area Trubisky hasn’t struggled in to this point, his issues throwing on his second read have led to a sub-50 percent completion rate (the fourth-lowest adjusted completion percentage) and a 29.9 passing grade on the PFF scale. GUH, that was a tough sentence to type without curling up into a ball of panic. But things only get more worrisome from that point.

Former NFL general manager (and noted Trubisky critic) Michael Lombardi weighed in with his two cents, offering this scathing review: “Trubisky is not fluent in playing quarterback, he lacks overall instincts for the position, accuracy, and when the game speeds up, he slows way down. He is a great athlete with a strong arm playing the position, not a great quarterback with high-level instinctive skills.”

Trubisky’s troubles with second reads and not playing instinctual football go hand-in-hand. Tying these two concepts together helps make sense as to why Trubisky has taken a step backward in Year 3 when he should be takin g a step forward toward the type of quarterback he wants to be. This isn’t to say it can’t happen, but at least we have an idea as to why it isn’t happening right now. Things can change if Trubisky continues to put in the work, and there is no better place to show you are moving in the right direction than in front of a nationally televised audience on ESPN’s Monday Night Football.

After watching quarterbacks throughout the league put up big numbers on a Bears-less Sunday, Chicago’s Monday Night Football appearance in Washington feels bigger and more important for Trubisky than if he was slinging it on a Sunday at noon.

Perhaps going up against a pass defense that has allowed opposing quarterbacks to complete 78.2 percent of their passes, average 8.3 yards per attempt, and post a 119.4 passer rating in the first two weeks will put Trubisky on the right track. Because while much has been made about Trubisky’s issues through two weeks, and rightfully so, this is the best time to get on the right foot.

Trubisky has missed open receivers, misread run-pass option plays, and the offense has just one touchdown in 22 possessions.  If he can eliminate those mistakes against a woeful defense, it could flip a switch he appeared to hit down the stretch last year when he was making progressions, going through his reads, and making plays down the field.