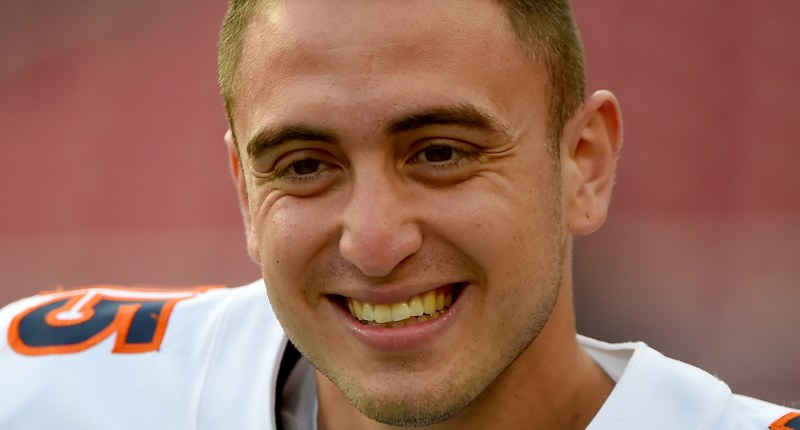 Eddy Piñeiro’s appearance on Monday Night Football should put to rest any concerns regarding the Bears kicker’s mental fortitude or physical toughness.

Piñeiro made all four of his extra points and a 38-yard field goal in Chicago’s Week 3 win at Washington. How gutsy was Piñeiro’s performance? I couldn’t even bring myself to be upset that he missed a 44-yarder wide right. He gave it the ol’ college try and pushed it a bit. Sometimes a strong effort while facing adversity is enough to allow me to look past a missed field goal in what was a lopsided game in the Bears’ favor to that point.

In the end, a big takeaway from Monday’s win was Piñeiro’s willingness and ability to kick through the pain of an injured right knee. Because while it’s not as if football fans aren’t used to guys playing through pain, it’s just that it isn’t necessarily expected from the kicker position.

Late last week, Piñeiro suffered an injury to the knee on his kicking leg. The injury was serious enough to limit him in practice and list him as “questionable” on the injury report. Heck, Nagy even admitted there were contingency plans in place if his kicker couldn’t suit up for extra points and/or field goals.

But Piñeiro practiced at FedExField before the game and played, though did so with a visible limp. So credit the kicker for gutting one out in front of a nationally televised audience. Showing some physical toughness to kick is certainly one way to win over fans who might not have been convinced after a summertime of obsessing over that position. But still … Piñeiro probably should have had fans won over long before Monday.

Watching Piñeiro land awkwardly after his kicking followthrough was a bit uneasy to watch. The idea of the Bears losing their kicker to injury in a lopsided game never left my mind. Neither did the idea of losing Piñeiro to injury after going through an intense kicking competition that appears to have found a viable solution to a long-standing problem. But knowing that Piñeiro missed out on the opportunity to be the Raiders kicker last year because of a groin injury, I suppose I can understand where he was coming from when he insisted on kicking through the pain on Monday.

And yet, watching him grind through it made for some painful visuals. Then again, if Piñeiro was willing to do so, and the collective brain trust of Head Coach Matt Nagy, Special Teams Coordinator Chris Tabor, the team’s training staff, and professional kicking consultant Jamie Kohl co-signed on it, then we’re left with nothing else to do but to tip our caps.

Next up for Piñeiro, his first game at Soldier Field since the home-opener. Between winning a road game with a 53-yard boot and playing through injury a week later, Piñeiro will be more likely to be greeted with thunderous applause in the Bears’ next home game than the nervous murmurs that had accompanied him on previous kicks.