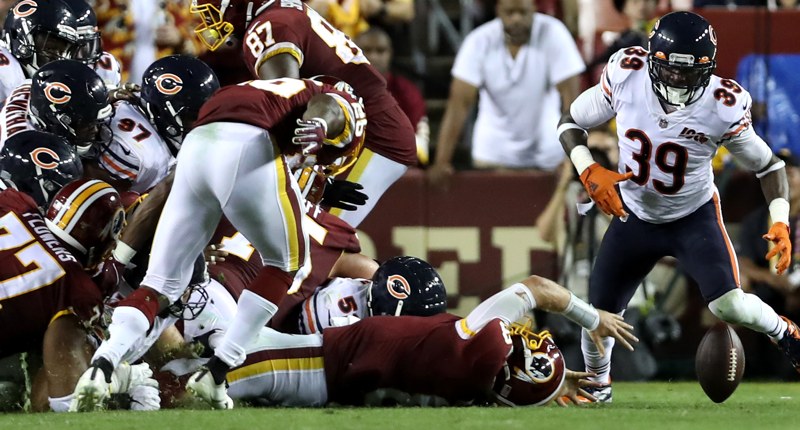 Before we dive into the nitty gritty of an expansive Bears injury report, here is the latest news from our nation’s capital:

Washington QB Case Keenum did not practice today due to a foot injury.

The Bears delivered four sacks and nine quarterback hits on Washington’s Case Keenum on Monday Night Football. It was only a matter of time before we learned the severity of the pain that was inflicted on the Washington signal caller. It will soon be rookie Dwayne Haskins’ time to shine under center … unless Jay Gruden calls on Colt McCoy to reprise his role as Washington’s chief backup quarterbacking option.

As for the Bears, they’re dealing with some injury issues of their own ahead of Sunday afternoon’s game against the Vikings. You can check out Brett’s briefing on the robust injury here, which is admittedly jarring to see because there are so many names on it. Then again, it was expected that the Bears would be practicing short-handed after a quick turnaround from Monday Night Football. Let’s dive into some of these injury updates

For the first time in the 2019 season, Trey Burton was listed as a full participant in a Bears practice. HOORAY! Burton has been slow out of the gate while dealing with a groin injury that kept him out of the season-opening loss against Green Bay and limited him in the weeks of practice that have happened since. Burton got into the starting lineup in each of the last two weeks (despite being a limited participant in practice), but it’s particularly encouraging to see him practice without limitations. Stack a few more of those in a row and Burton will be on the cusp of re-gaining the confidence of Bears fans who know his importance to the offense.

The right side of the Bears’ offensive line looks to be at full strength again. Guard Kyle Long (hip) and tackle Bobby Massie (illness) were not restricted in any way at Wednesday’s practice. A bothersome hip injury hindered Long in practice last week and landed him on the injury report. Long played a full game on Monday, so it is good to see him at full strength. The same can be said for Massie, who battled vertigo before Monday’s game at Washington and was inactive. Cornelius Lucas did a bang-up job in a pinch, but it will be a welcome sight to see the starters on the right side back in the swing of things.

This is the second time in as many weeks we’ve seen safety Eddie Jackson listed as limited because of a shoulder injury. When it popped up last week, Bears Head Coach Matt Nagy made it a point to note that Jackson was limited, but the injury wasn’t a big deal. Jackson’s limited participation could be as simple as a veteran’s maintenance day.

Two new injuries have shown up on the injury report and have limited a pair of Bears. Utility man Cordarrelle Patterson (tricep) and defensive end Roy Robertson-Harris (glute) showed up as limited on the injury report. I’ll be curious to hear Nagy’s perspective on these two injuries and their extent. Patterson has been a multi-purpose threat for the Bears to this point, being used as a running back, wide receiver, and kick returner (among other roles). Robertson-Harris was starting in place of Bilal Nichols (who did not practice and was out for Week 3), so his injury status will be monitored closely.

Taylor Gabriel (concussion), Akiem Hicks (knee), Eddy Piñeiro (knee), and Nichols (hand) were held out of practice. Gabriel is in concussion protocol and his availability for Sunday’s game is going to be in the air until clarity comes down from the independent doctors responsible for monitoring head injuries. Hicks left the win at Washington early with a knee issue. His not practicing could be a long-term issue or could be Nagy playing it cautiously with his best starting defensive lineman. And with Nichols out and Robertson-Harris limited, getting to Sunday with enough healthy bodies to put on the line of scrimmage should be a priority. Bears fans watched Piñeiro gut it out on MNF, though I am convinced he would have been better off staying off his kicking leg if possible. Nagy said the Bears had contingency plans if Piñeiro couldn’t kick. And if he can’t practice, it might be time to start prepping those plans in case they need to be used.