Wait ... What Did Matt Nagy Yell at Mitch Trubisky? Skip to content 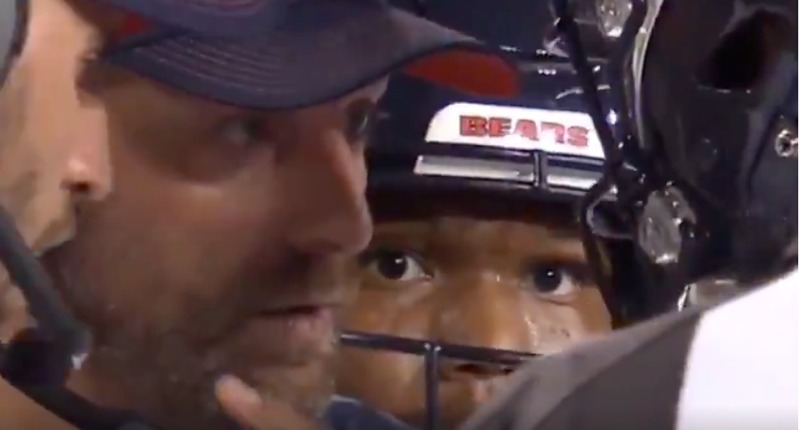 For the most part, Bears Head Coach Matt Nagy puts up a good, calm, even-keeled front.

But on Monday Night Football, some stealth camerawork caught a different side of the Chicago Bears head coach with a brief glimpse of a heated conversation with quarterback Mitch Trubisky.

Here are some snap-shots:

Did anyone else see Matt Nagy tell Trubisky “shut the fuck up, Right now? At the timeout in the second Quarter? #CHIvsWAS pic.twitter.com/rC4q6JXZxy

Nagy saying fan the fuck up to Mitch pic.twitter.com/v9nlqOWcAj

Professional lip reading: “You need to calm the fuck down. I got you”. — Matt Nagy to Mitch Trubisky

Nagy was asked about the exchange during his Wednesday press conference, he had an explanation of what happened:

On that viral moment between Nagy and Mitch Trubisky from #MNF, Nagy says: "Sometimes I have a little bit of a heated side to me sometimes… Nothing is personal. Middle of the game, just us going at it." #Bears

#Bears coach Matt Nagy on TV catching him chewing out Mitch Trubisky before a first down: ‘There’s a difference between it being personal and task-related.’

Matt Nagy on the chewing out of Mitchell Trubisky caught on camera in Monday’s game: “I have a heated side to me, and that’s OK. Mitch does, too. … It’s because we care.”

Whether Nagy was telling his quarterback to STFU or if that hot exchange ended with an “I got you,” (… or both) doesn’t really matter. Because whatever that exchange was, it is worth pointing out that it worked. After that moment, Trubisky went on to throw three touchdown passes to Taylor Gabriel en route to a 31-15 Bears win.

What *REALLY* stands out is that the coach-quarterback relationship has fire and passion that has not ever been displayed publicly before. And while it isn’t like we haven’t seen Nagy coach up Trubisky or get him hyped on the sideline before, it’s just that we haven’t seen him do it forcefully as we did in the embedded images and videos above. And frankly, I don’t know a Bears fan who hasn’t voiced similar sentiments while watching the games over the first few weeks of the season.

For me, the biggest takeaway from the viral MNF moment is that the Bears head coach and starting quarterback are humans. The head coach is not a programmed robot who talks in coach-speak. The quarterback isn’t a carefully-wired machine who only parrots talking points brought up in meetings and on the practice field. That is refreshing as heck and fans would probably like to see more of it.

To be sure, by the way, Mitch Trubisky loves it.