If Eddy Piñeiro Suits Up on Sunday, He'll Have to Kick Through Pain Skip to content 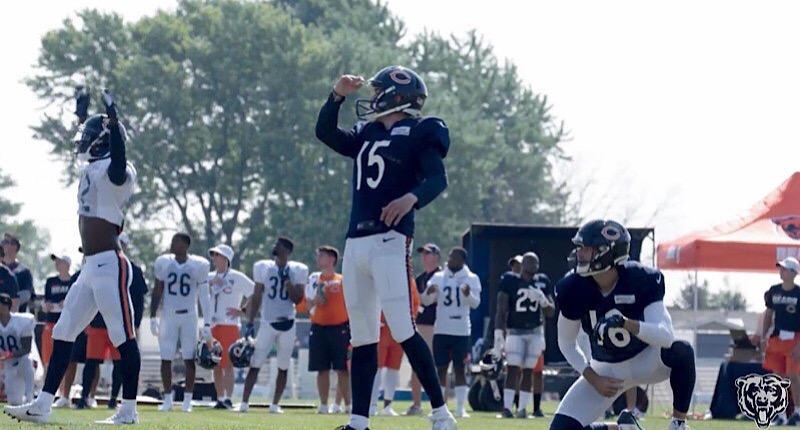 Eddy Piñeiro gutted it out on Monday Night Football, kicking through the pain of a knee injury suffered last week in the weight room just days before Chicago’s prime-time win at Washington.

Unfortunately, the right knee injury has continued to limit Piñeiro in practice. So if he wants to kick on Sunday, he’ll need to battle more than the elements.

Eddy Pineiro is officially questionable for Sunday. But he did practice some today and Bears coaches have continued to emphasize that he’ll just need to play through pain.

I have read and re-read that tweet a dozen times, but still haven’t found any comfort level regarding the context. Specifically, the part that states “Bears coaches have continued to emphasize that he’ll just need to play through pain” has me feeling itchy.

We saw Piñeiro kick through pain on Monday, which was worthy of a tip of the cap, a pat on the back, and probably a hug. But it hurt to watch Piñeiro limp on and off the field when his number was called. It looked so awkward for Piñeiro to kick at one point, Bears Twitter wasn’t even upset when he missed a 44-yard field goal because the fanbase was collectively empathetic with a guy toughing it out to kick. Seriously, I did not see that coming.

Playing through pain is often applauded because there is nothing like gridiron gladiators pushing through that adversity. HOWEVER, playing through pain while risking a drop in performance is something that shouldn’t happen. If the Bears continue to push a player whose sole job is to kick continues to do so while battling a knee injury to his kicking leg that appeared to impact how he kicked in the last game, then the powers that be need to realize the risks that lie ahead. Because trotting a kicker with a troublesome knee could come back to bite the Bears  in the form of missed kicks — or worse — an injury to the guy who won their summertime competition.

Rather than force the issue, perhaps the Bears should look at alternative solutions if their kicker can’t give it a full go. Head Coach Matt Nagy said the team had contingency plans if Piñeiro couldn’t kick on Monday, so I imagine those plans could still be in place this week.