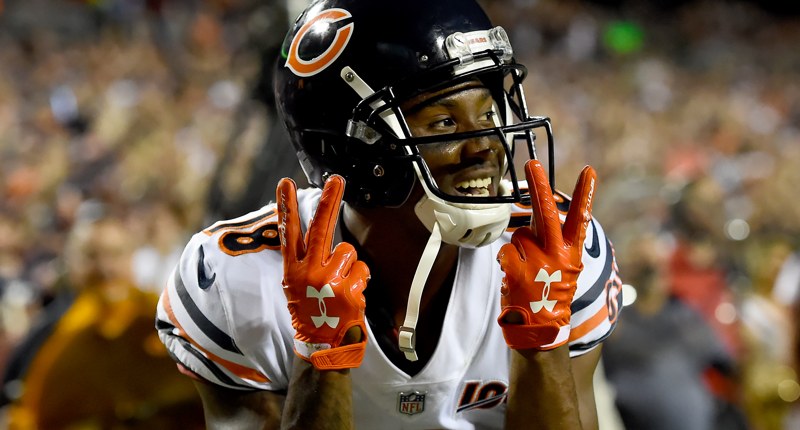 The best recap of Taylor Gabriel’s performance on Monday Night Football came in the form of this nifty NFL graphic:

Wishing a speedy recovery to Taylor Gabriel who had three touchdowns before exiting the game tonight. @TGdadon1 pic.twitter.com/oFLnV8l9ke

Six catches, 75 receiving yards, three touchdowns, a win, and one aesthetically pleasing graphic to tie a bow on everything. You really can’t ask for much more than that for a Monday treat.

If you thought Gabriel’s game was a big one for the Bears, just imagine how one sports bettor felt. Because in addition to making Mitch Trubisky’s day at the office a successful one and helping the Bears pick up a win, Gabriel also made someone nearly $1,400 richer:

The big play in Gabriel’s day was the 36-yard touchdown catch in which he hauled in a perfect pass from Trubisky and had the awareness to tap two toes in to complete the process. And while I can’t get enough of the highlight in its entirety, this graphic does a lot to show how awesome the play was:

Mitchell Trubisky's 36-yard touchdown pass to Taylor Gabriel had a Completion Probability of 10.4%, the least probable completion this season.

Gabriel's tracking tags were out of bounds [but his feet were in] when the pass arrived.#CHIvsWAS | #Bears100 pic.twitter.com/A7dKCutYo0

Gabriel has missed practice ahead of the Bears’ Week 4 showdown against the Vikings and his playing status remains up in the air. But if Gabriel plays, his presence could go a long way toward continuing to unlock some under utilized facets in Chicago’s offense.

The Bears were missing a vertical component in their offense before Gabriel’s breakout showing on MNF. So if Gabriel is in the lineup, his mere presence provides a deep threat that could open up other avenues to successfully move the ball elsewhere in the offense. Having a worthwhile deep threat opens up the crossing and slant patterns Trubisky tends to throw well, which could help him establish some early confidence and build an early rhythm. But also, the threat of the deep ball also means the Bears could strike from long distance at any time.

According to Pro Football Focus, Gabriel recorded 2.59 yards per route run against Washington. Or in other words, Gabriel was getting some length out of his routes. Gabriel also picked up five first downs as Trubisky threw to a 150.9 passer rating when targeting No. 18 on Monday. These are all encouraging numbers that should not be ignored in the grand scheme of things when discussing the Bears offense. More extended patterns leads to more first-down opportunities, which could grow into big-play chances, and ultimately big-time touchdown-scoring plays.

Gabriel showed big-play potential in his first season with the Bears and before that with the Falcons. And while I don’t necessarily believe Gabriel is going to be the focal point of the offense just because he had a big game in prime time, using him more (especially in the same ways he was used last week) could bring elements to the offense that were not available earlier in the season. Of course, he needs to be cleared from concussion protocol in order for that to take full effect.