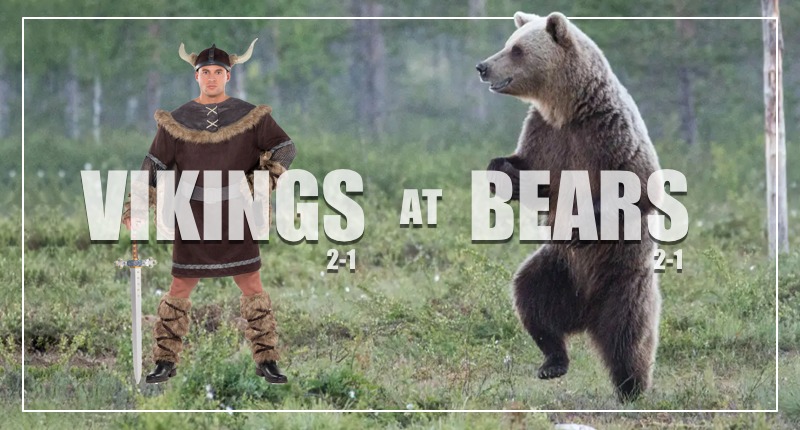 Sometimes, the importance of a football game can be easily explained. So rather than talk around the storylines, I’ll present this Sunday’s upcoming game between the Bears and Vikings through a simple prism.

Sunday’s winner will have a slice of the first-place pie when the dust settles in Week 4. The loser will go back to the drawing board having lost two division games. And since no NFC North champion has rallied to win the division after losing its first two rivalry games, the grudge match between Chicago and Minnesota has some pretty big implications.

The Westgate SuperBook in Las Vegas lists the Bears as 1.5-point favorites with an over/under set at 38. That projected point total is the second lowest total on the board for this week’s slate of NFL games. Once again, the oddsmakers project a tightly contested, low-scoring battle.

Bears Offense: Anthony Miller is off to a slow start, but the Bears could use his route-running precision and reliable hands more than ever on Sunday. Fellow wide receiver Taylor Gabriel is out because of a concussion, tight end Trey Burton is still working his way back into being at full speed, and Allen Robinson figures to get all sorts of extra attention from Minnesota’s secondary. That leaves Miller as a potential top target for quarterback Mitch Trubisky. An injury slowed Miller down in training camp and he hasn’t been himself to this point of the regular season. Perhaps a breakout is on the horizon.

Bears Defense: Khalil Mack is living rent free in the head of Vikings quarterback Kirk Cousins. And why not? Mack virtually wore Cousins like a suit the last time these two teams played at Soldier Field. Mack is a force even when he doesn’t get to the quarterback, but last week he reminded a nationally televised audience he can still get to the quarterback. Expect the Vikings to throw every available body at Mack to slow him down on Sunday.

Vikings Offense: Dalvin Cook is on an early season tear. He has rattled off three consecutive 100-yard rushing games and has looked every bit like the top running back prospect he appeared to be coming out of Florida State a few years ago. According to Pro Football Focus’ notes, Cook is tied for the league lead with 15 missed tackles forced on runs and has the best grade among the NFL’s running backs. If the Bears can slow him down, it will go a long way toward picking up a third straight win. But if they can’t, it could be a long day at the office.

Vikings Defense: Harrison Smith is public enemy No. 1 among many Bears fans after his late hit on Mitch Trubisky injured Trubisky’s throwing shoulder and put him out of action for a few weeks. Beyond inflicting that injury, the Bears are going to want to keep tabs on wherever Smith lines up on the field. Smith is one of football’s best safeties because he has the range to cover all of the passing routes, while also being a factor in stopping the run. In brief, Smith needs to be accounted for on every snap.