Like Everyone Else, Matt Nagy is Hoping to Get a Mitch Trubisky Shoulder Update Soon Skip to content 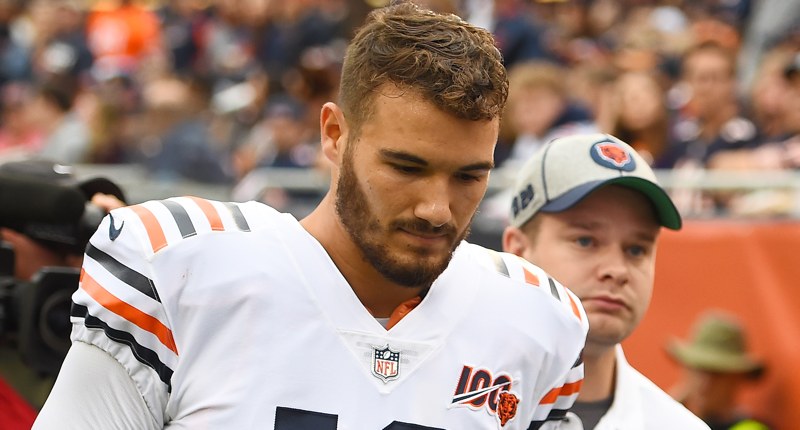 Mitch Trubisky suffered a left (read: non-throwing) shoulder injury on the sixth play of the Bears’ opening drive in what was ultimately a 16-6 win against the Vikings.

But if you were hoping Bears Head Coach Matt Nagy would shed further light on the situation tonight, your hope will have to roll over tomorrow because he is still in the dark:

If you want to go to sleep with some positivity in mind, run wild with this:

Perhaps a key quote from Matt Nagy on Mitchell Trubisky’s status: “I’m anxious to find out too as far as what’s going on for next week.”

That quote from Nagy *COULD* be read as if the coach didn’t *IMMEDIATELY* know Trubisky was *SERIOUSLY* injured and *WOULD DEFINITELY* be out for multiple weeks, so maybe there’s still hope?

Ultimately, Nagy did not have much of anything to add beyond what was already known. An injury to Trubisky’s non-throwing shoulder is not believed to be a season-ender in Nagy’s opinion, but the quarterback’s status for upcoming games is still to be determined. Trubisky still needs to go further medical testing before a determination will come to fruition.

I’m not a doctor, nor will I pretend to play one on this site. HOWEVER, I continue to find myself circling back to this injury being to his non-throwing shoulder. Last year’s injury (coincidentally suffered at home against the Vikings) was to Trubisky’s right (a.k.a. throwing) shoulder. It kept him out of action for just two games, but Trubisky went 21 days without getting into game action. Shoulder injuries aren’t easy to deal with, but the Bears could be fortunate to have the bye week coming up after a Week 5 trip to London.

Hey, at least Chase Daniel (22/30, 195 yards, 1 TD, 101.4 passer rating) looked good in relief of Trubisky. Daniel’s knowledge of the offense and where to go with the ball was a difference-maker on Sunday. The Bears’ offense should be in capable hands with Daniel for the time being, but Trubisky’s shoulder will be on our minds until news comes across the wire.