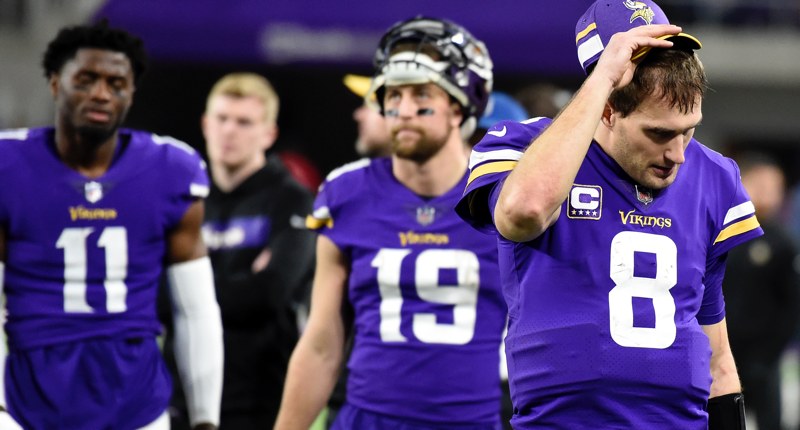 If Sunday’s Bears-Vikings game comes down to the quarterbacks, Chicago appears to have a slight advantage.

Kirk Cousins is Pro Football Focus’ second-lowest-graded quarterback after three weeks, in what Steve Palazzolo describes as a “disastrous start” to the 2019 season for the highly-compensated Minnesota signal caller.

According to PFF’s data, Cousins is tied for the highest percentage of turnover-worthy plays (6.3 percent). Cousins has four fumbles and two interceptions through three games. And while the Vikings have done everything possible to protect Cousins by leaning heavily on the ground game, it is impossible to create a winning offensive formula when the quarterback is handing the ball back to the opposing offense as often as Cousins has to this point.

The Bears had Cousins’ number last year, limiting him to a 77.7 passer rating in the two matchups between the NFC North rivals. Cousins completed more than 63 percent of his passes against Chicago, but was inefficient when his team needed him the most. Late in the game between the teams at Soldier Field, Cousins threw a back-breaking interception that Eddie Jackson returned for a touchdown. And in Week 17 when a Vikings win would have sent them to the playoffs, Cousins threw for just 132 yards and posted a 79.4 passer rating — a far cry from the 100.9 rating he posted in 15 games leading up to the regular-season finale.

Through three weeks, the only quarterback with a lower grade than Cousins is Case Keenum — the guy he replaced in Minnesota and who the Bears thoroughly thrashed on Monday Night Football last week. Mitch Trubisky hasn’t been much better in PFF’s eyes, ranking just one spot ahead of Cousins. But coming off a three-touchdown game in prime-time should have Bears fans feeling better about their team’s signal caller.