Report: Roquan Smith Out Indefinitely While Dealing With Personal Issue Skip to content 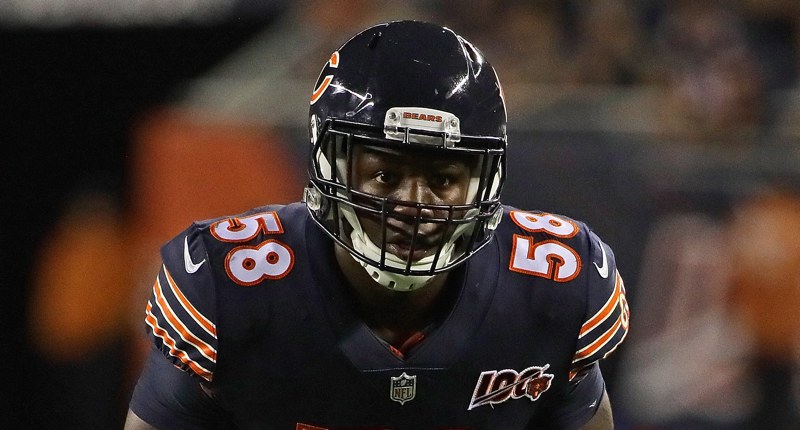 There hasn’t been much in terms of clarity regarding Roquan Smith’s absence from the Bears’ Week 5 win against the Vikings, but perspective is starting to emerge regarding the situation.

During a Tuesday appearance on ESPN’s “Get Up” program, NFL insider Dan Graziano said Smith will be out indefinitely while dealing with a personal issue. Graziano adds that sources informed him that the second-year linebacker “hasn’t been acting like himself” the last few weeks, and that the team wants to give him time to deal with his issues. And while Graziano makes a point to note that Smith could return as early as this week, it seems as if this issue will keep him out for a while.

Bears Head Coach Matt Nagy did not provide any clarity as to why Smith (who was on the sidelines for the game) was a late scratch on Sunday, then dodged all questions about Smith’s status during his Monday press conference. Nagy’s non-committal stance when asked if Smith would travel with the team to London for its Week 5 matchup against the Raiders suggests how sensitive this matter is right now.

If Smith can’t play, Nick Kwiatkoski remains the next-man-up on the depth chart. Kwiatkoski collected a team-leading nine tackles as he filled in admirably for Smith and has enough starting experience to allow the Bears to feel comfortable despite a key starter being out. And with Kwiatkoski sliding into a starting role for the time being, we should also keep tabs on Joel Iyegbuniwe, Kevin Pierre-Louis, and Josh Woods, who are next in line on the depth chart.