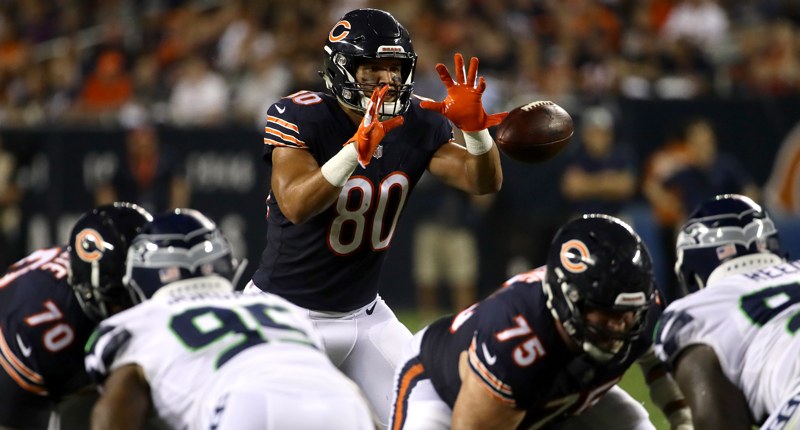 Chase Daniel is the starter in place of an injured Mitch Trubisky, whose injury to his non-throwing shoulder won’t stop him from traveling to London, but will most likely keep him off the field for Sunday’s game against the Raiders. Beyond Daniel and Trubisky, the Bears do not have another quarterback on the roster.

That seems risky, to say the least.

Conventional thinking led us to believe the Bears would use the roster spot created by waiving defensive lineman Abdullah Anderson to promote quarterback Tyler Bray from the practice squad to the active roster. Instead, the Bears re-signed tight end Bradley Sowell to fill the roster vacancy. Perhaps that is a sign of confidence that Daniel can make it through Sunday’s game fully healthy. Or that Trubisky might feel well enough to serve as QB2. Either case seems like a dangerous assumption.

As for the team’s internal backup options, let’s just say they are limited:

Matt Nagy says it was indeed Trey Burton who was the emergency QB yesterday. Broadcast reported it was Tarik Cohen. #Bears

During his Monday press conference, Bears Head Coach Matt Nagy informed reporters that tight end Trey Burton was the emergency quarterback who would have taken snaps if Daniel had to leave the game. Nagy’s share was a bit of an eyebrow-raiser, especially since the CBS broadcast reported running back Tarik Cohen was the emergency signal caller. In other words, it’s not as if either guy is the obvious option.

Nagy cited Burton’s experience as a high school quarterback as to why the Bears’ top pass-catching tight end target would be pressed into duty as an emergency situation. And for what it’s worth, Burton was recruited as a quarterback when he signed on with Urban Meyer at Florida. Burton eventually moved around and played several positions before settling in as a tight end. But to be fair to Cohen, he has two touchdown passes under his belt in his first two years as a pro, including one that was originally drawn up to let Burton be the trigger man before his anxiety changed his role in the play.

I suppose if Nagy wanted to fully go outside-of-the-box, he could draw up a game-plan that would make his predecessors blush. WildBear offense, anyone?

After the Bears defeated the Panthers in October 2017, then-head coach John Fox casually reminded the football world that he was the Godfather of the Wildcat offense. Seriously. On December 24, 2006, DeAngelo Williams and DeShaun Foster combined for 49 carries and 184 rushing yards in a 10-3 win against the Falcons. Williams was tasked with taking direct snaps from center because he had plenty of experience doing so in a similar package while at the University of Memphis. It was one of those games when desperate times called for desperate measures and Fox did what was necessary come away with a win. And while Nagy seems willing to pull out all the stops to go into the bye week with a 4-1 record, it is tough to imagine an ex-quarterback committing to so many run plays.

Then again, Nagy and Offensive Coordinator Mark Helfrich could have a field day with formations.

Bray could still get called up to the active roster before the team flies to London. But if he doesn’t, then the Bears will be rolling the dice with just one healthy quarterback on the roster.