The Offensive Line is Broken
Search
Skip to content 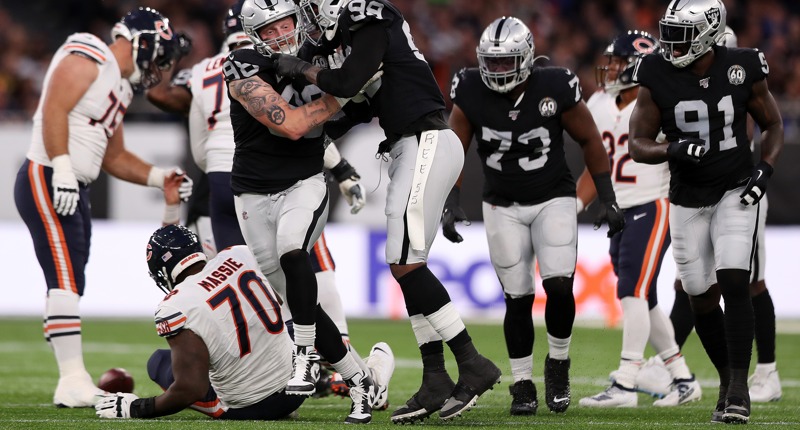 The title says it all, doesn’t it?

Well, here’s a few more words: With suspect pass protection and virtually non-existent run blocking, the offensive line is the crystal-clear, No. 1 concern for the 2019 Chicago Bears.

We can (and will) talk about the broader, general state of regression the offense is experiencing soon, but make no mistake about it: the offensive line is the problem at the moment. And Bears Head Coach Matt Nagy acknowledged as much in his post-game press conference.

“In this game, it usually starts up front,” Nagy said in his post-game press conference. “We know that, we preach it, we talk it, we understand that, and throughout the game, weren’t real successful offensively running the football. We need to figure out why.”

Figuring out the “why” will likely be Nagy’s top priority during the bye. And with good reason. This group has unexpectedly regressed from last season.

Left guard Cody Whitehair is the only Bears offensive lineman who grades out among the top half of his position group, according to Pro Football Focus’ grading scale. In fact, Whitehair is the 15th-highest-graded guard among the 72 qualifiers on PFF’s leaderboard. But that’s where the the positive vibes end.

Charles Leno Jr. is just 10 months removed from playing in the Pro Bowl, but is PFF’s sixth-lowest-graded tackle. Only Bobby Hart, Cam Robinson, J’Marcus Webb (ahhh, an old friend), and Will Richardson Jr. grade out worse than Leno. Worse yet: through five weeks of the season, Leno has been called for eight (8!) penalties after being flagged just seven times all last season. Leno had two holding penalties called against him against the Raiders on Sunday to bring his total to four in five games after being flagged for holding just once last year. The left tackle is supposed to be an anchor of the offensive line, but not in the sense of weighing the rest of the offensive unit down.

Right guard Kyle Long is a three-time Pro Bowler, but looks like a shell of himself in his age 31 season. Injuries appear to have taken a toll on Long, who hasn’t shown the same ability to impact the game at the line of scrimmage as he once did in his prime. Right tackle Bobby Massie had a career year in 2019, but hasn’t built upon that season of success to this point. Center James Daniels hasn’t had any snap snafus, but is still clearly a work in progress at center.

Simply put, the Bears need a better return on investment. And frankly, they need to get it immediately. Between shelling out $41.5 million in extensions for Leno, Massie, and Whitehair since summer 2017, a second-round draft pick (Daniels) in the 2018 draft, and a restructured deal (Long) to an established veteran, the Bears have put a heavy investment into something that isn’t working and happens to be the root of the team’s offensive problems.

You’d love to be optimistic and say the Bears can make an adjustment here, do this more, and get back into the swing of things. But it is pretty hard to “adjust” for “getting physically dominated at the point of attack.”

Nagy was pretty cryptic in his post-game comments, hinting that change was on the horizon. But before change is enacted, there is going to be some time to look in the mirror and provide a self-assessment.

“We have a bunch of strong people in that locker room. They’re pissed off right now and they’re not happy,” Nagy said. “And so they’re in there and they’re going to figure it out. Leaders create leaders right? So, right now, they’ve got to lead themselves. No more talking, we just go out there and play.”

The time to talk is over. What happened last year doesn’t matter. Not even preseason grades that pegged the offensive line to be among the 10 best in football have any value to this point. The time has come to fix what is broken.