Do You Realize How Many Penalties the Bears Have Accumulated This Season? Skip to content 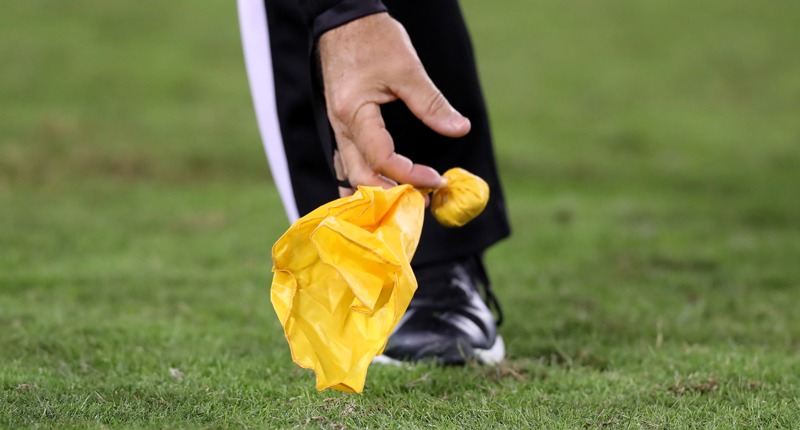 Losing to the Raiders on Sunday put a spotlight on some troubling early-season trends for the Chicago Bears – not to mention their decreasing odds of repeating in the NFC North – like the broken offensive line and running game. Together, those issues have prevented the Bears’ offense from reaching its full potential all year long.

But what’s irked me more than any of that is the non-stop freakin’ penalties.

Chicago has been called for 43 penalties through five games this season, which ranks seventh most in football (and that figure doesn’t even include seven other penalties that have been declined or the two flags that went down in the books as offsetting penalties). So in a way, the Bears have been flagged a whopping 52 times this season. That is far too much laundry.

That there are more winning teams (6) than losing teams (5) on that list is of no consequence to me. Being on a short-list with Washington (who fired their coach), Atlanta (whose coach is on the hot seat), and three other sub-.500 teams isn’t where you want to be after five games. And though the Bears are one of the handful of teams with winning records, the ever-growing mound of penalties are a big, legitimate reason why they aren’t 4-1 or even 5-0.

I mean, just check out the Bears’ game-by-game breakdown, with data courtesy of NFLpenalties.com, and consider the impact:

It isn’t a coincidence that the Bears’ two 10-penalty games came in losses. And it is fitting enough that both games featured crucial penalties that dogged the team at the most critical times. Like in Week 1 when the Bears had 1st and 10 from the Packers 43-yard-line, then watched left tackle Charles Leno Jr. commit a 10-yard holding penalty and 10-yard illegal use of hands penalty on back-to-back plays, only to see receiver Taylor Gabriel get flagged on a 10-yard offensive pass interference on the next play. Or in Sunday’s game in London when a running into the kicker penalty enabled the Raiders to go on what turned out to be a 90+ yard game-winning scoring drive.

Whether the penalties push the Bears offense behind the sticks or allow opposing offenses to continue driving, it needs to get better and fast. There are too many key players with plenty of NFL seasoning who have returned for this to be such an issue.

And for what it’s worth, the Bears were called for the fifth FEWEST penalties last season. What gives, guys?