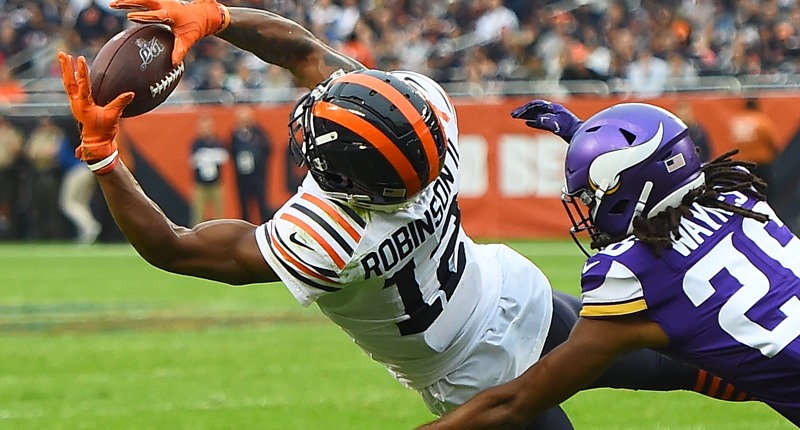 Part of me believes that Allen Robinson signed with the Bears, because he needed to leave the desolate offense and uneven quarterback play of Jacksonville behind him, in order to finally reach his full potential. And while the Bears have yet to carve out an identity 21 games into the Matt Nagy era, at least Robinson is holding up his end of the deal.

Robinson checks in at No. 12 on Gordon McGuinness’ list of the NFL’s 25 best receivers at Pro Football Focus. And while we could look at his team-leading 31 catches, 377 receiving yards, and two touchdowns and say “duh, of course he deserves a spot” while reading the list, McGuinness points out something that might not have caught your eye.

Through five games, 22 of Robinson’s 31 catches have gone for either a first-down or touchdown. That is a remarkable number that shows how well Robinson has played and how important he has been to the offense. It’s a real shame he hasn’t gotten much help elsewhere, because he’s on pace for a monster season.

Robinson is on pace for a 99-catch, 1,206-yard, 6-touchdown season. Only Brandon Marshall’s 2012 and 2013 seasons can boast a more impressive stat line among Bears receivers. In fact, if Robinson continues playing at this pace, he’ll join a select duo of Bears wide receivers – Marshall and Marty Booker – who snagged at least 90 passes, gained at least 1,000 receiving yards, and hauled in at least six touchdown receptions in a single season.

This is true WR1 stuff:

Quite the turn of events!

Despite his success, Robinson continues to work at his craft:

Back in the Lab! pic.twitter.com/Ft73NeT5Bk

In what has otherwise been a woeful offense, Robinson is a star. A true No. 1 receiver that the Bears have been searching for since as long as I can remember. Now, to find a quarterback who can consistently deliver him the ball and carry Chicago’s offense to greatness.