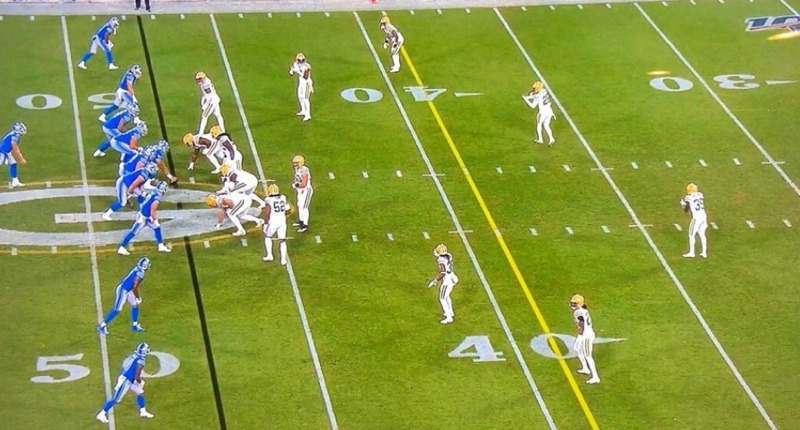 The bad news is I’m still under the weather, but the good news is I have enough soup to last me throughout however long this cold lasts.

Lions blow a 13-point lead, settle for 5 field goals and have multiple blown calls go against them but, on the bright side, in 5 billion years the sun will swell into a red giant, vaporize the Earth and obliterate all evidence of this game happening

Packers coach Matt LaFleur, postgame locker room: "I don't know how the hell we pulled that off."

SVP: Roasting the refs on SportsCenter.

2 — 'That's pass interference, isn't it? I have eyes, and that looks like that's gotta be a flag.'

Don’t blame us Detroit. We're not the ones who pushed the “refs are trash” button.

Here's what incompetence in officiating does: It gets people thinking that the league may be getting back at Lions coach Matt Patricia for wearing the Goodell clown nose T-shirt after Super Bowl LI. While extremely unlikely, horrible calls open the door to conspiracy theories.

The NFL refs inability to get basic calls correct are literally the difference between first place and last place for the Lions.

It’s a multi billion dollar busy & u get this kind of nickel & dime type of officiating. Almost as bad as the Saints/ Rams game. Could determine a playoff spot.

This one hasn't received enough attention. When the Lions had 12 on the field before a Packers field goal, they were immediately flagged, giving the Packers a first down and then a TD. When the Packers had 13 on the field they were allowed to call timeout. https://t.co/qCEOlQWydI

Per https://t.co/lDZ8rWblZM, Green Bay leads the NFL in “beneficiary yards” this season, which is when a team’s opponent is called for a penalty.

The Packers have accrued 501 yards through penalties.

Detroit, on the other hand, is dead last with 234 yards.

#Bears LT Charles Leno: Kyle Long's "emotions are couldn’t tell you, probably all over the place right now. Spoke to him, though. He said, this is his words, he said he’s a Bear for life, though. So … that’s the words I remember him saying. That’s how he wanted to end things."

Taylor Gabriel on his wild last game (3 TDs in a row, then a concussion):
"They tell you to stay away from your phone. But I mean, after three touchdowns, like I want to be on my phone. I want all the love. I just want it. You know what I mean?"

Akiem Hicks and Khalil Mack Were Back at Saturday’s Practice