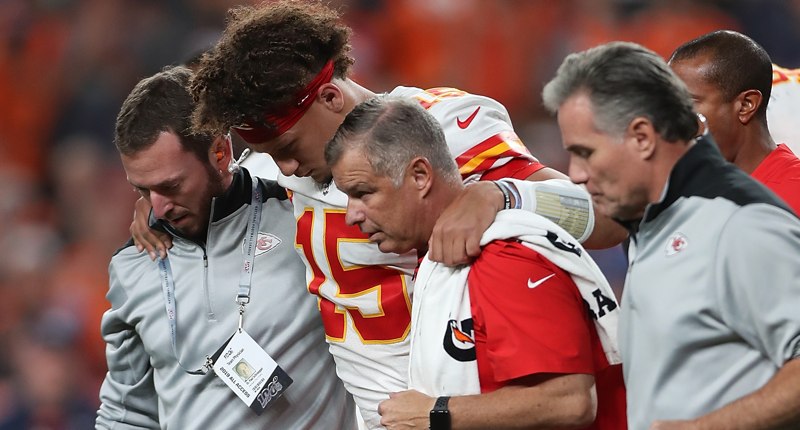 Major injury news out of tonight’s Thursday game, with Chiefs star QB Patrick Mahomes suffering a knee injury on a sneak, and immediately being ruled out for the rest of the game.

Although there wasn’t much to see on the play, and Mahomes was ultimately able to walk off under his own power, you can see in this clip that the issue pretty clearly involves his kneecap:

Mahomes got some respect from the opposition before heading off for X-rays:

Mahomes was walking without a noticeable limp there, but obviously that doesn’t tell you the whole story about a player’s ability to do his thing in game action. Hopefully, for his sake, it isn’t serious.

Notably, the Chiefs play the Packers and Vikings the next two weeks, and don’t play the Bears for another nine weeks. Insert your choice of comment here. Mine has naughty words in it.

Matt Moore backs up Mahomes, and he’ll be the QB for however long Mahomes is out – unless he’s out for a long time and the Chiefs decide to do something crazy like go get Eli Manning.

UPDATE: Obviously there could still be plenty of damage, but at least there was no break:

Patrick Mahomes suffered a patella (kneecap) dislocation. I’m told there was no break. MRI will reveal if there is any ligament damage.