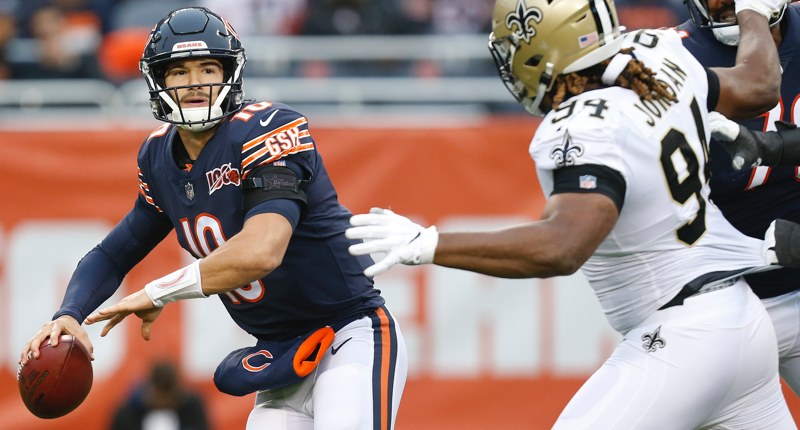 A season that started with so much promise, upside, and potential is in danger of spiraling into unforeseen depths. We can underscore issues on the offensive line, lament the non-existent running game, and blame injuries that have begun to pile up, but when things go south, good quarterbacks pull it together to make the best of a bad situation.

Unless, of course, they can’t.

The analytics suggest this is going to get worse before it gets better:

From a mechanical standpoint, the analytics will be proven correct if his footwork doesn’t square up. So says his head coach:

Matt Nagy said he starts with Mitch Trubisky's footwork yesterday, which was "just okay," and that affects everything else.

Ah, yes, the mechanics. What once looked to be fixed is something that is messed up again. When Trubisky cleaned up his footwork, he proved he could make easy throws and  deliver deep balls. If the Bears had that guy going for them under center, they would be a different team — one that probably wouldn’t be calling player-only meetings or rumored to be in search for a replacement for QB1.

So what has gone wrong? Well, everything.

Check out these lowlights, analytical insights, and threads:

Trubisky over strides into this throw and his pass sinks pic.twitter.com/0w1LtfTxc6

This play really represents everything that is wrong with this Bears offense. On this RPO, the Bears offensive line appeared to open something up for David Montgomery.

Trubisky decided to keep it, but he had both Anthony Miller and Taylor Gabriel wide open. #Bears #Bears100 pic.twitter.com/OLW3yCYH5Y

Cohen is wide open on this play on Trubisky never sees him until he decides to go out of bounds for some reason.

Either way you have to see him a lot earlier. This is just bad QB play. pic.twitter.com/jFK9SB6VDO

You see, at first, I read the defensive end crashing down and when he does that, my coaches tell me to keep the ball. After that I'm supposed to throw either the flat or stick route but, well, I just didn't wanna! I don't care what's open! pic.twitter.com/Ke2VBWe2Wp

And that's how I ended up here: underneath Cameron Jordan.

Brett sent a good text to our group chat when we discussed the above thread.

In short: The Boss (Brett) was willing to bet his bottom dollar that the deep receiver — whom Trubisky should not have been targeting — was Allen Robinson. Sure enough, while Trubisky was locked on to a deep (but covered) Robinson, two different receivers were getting open and the result of the play was Trubisky getting sacked because he didn’t even look at either. UGGGGGGH.

Let’s check out some more!

We have two options for what Trubisky was attempting on this throw.

1. He was throwing the ball away on 4th down

Either way, he had Anthony Miller open on this mesh. They only needed three yards for a first down. #Bears #Bears100 pic.twitter.com/XGbD3lyqoz

OOF. It was hard re-watching this after seeing it in person from an end zone seat that saw many open receivers go unrewarded for running good routes or making the most of getting schemed open because the quarterback’s throws were high, wide, or short.

Based on what we have seen to this point of the season, riding it out with Trubisky would be a bitter pill to swallow. Bears fans of a certain age have seen how this movie plays out before, and we didn’t like the ending the first time, so why would you expect this one to be any different? However, it remains the most realistic option in front of us.

On the off chance he figures it out, rights the ship, and guides the Bears to an in-season turnaround, it would undoubtedly be the story of the year in the NFL. But even then, the Bears would still be wise to look toward the future. Because three years of uneven tape (at best) is more than enough to ensure that the team has a better contingency plan than a guy whose best trait is knowledge of the offensive system and terminology.

We have discussed trade options, and if one presented itself to the Bears, they would be wise to take it. Because while Trubisky was viewed as the future of the position, he certainly does not look like the answer right now. It would be disappointing to waste a top-10 defense on a quarterback who couldn’t do the bare minimum to help out the other side of the ball. And since GM Ryan Pace has pulled rabbits out of his hat before, I refuse to rule out something out of the ordinary.

But still … the most realistic future is one in which Trubisky starts for the rest of the year. My apologies for bursting that bubble of hope you were riding on. Change is probably coming down the line, but it is unlikely to happen before the October 29 trade deadline.