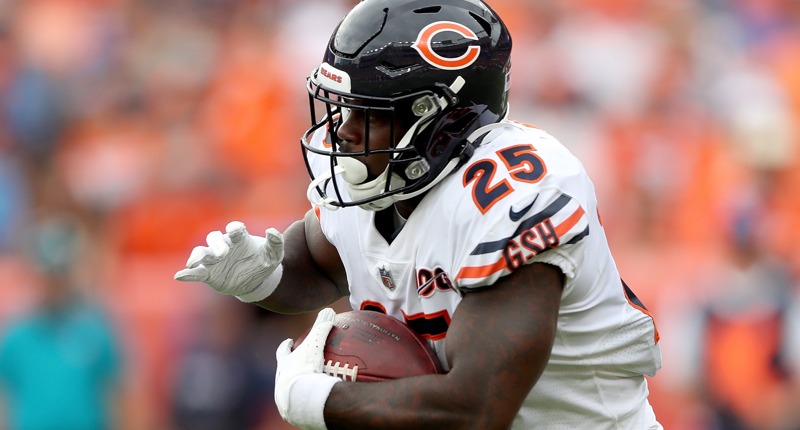 I never expected to be writing about the 2020 NFL Draft in October, but back-to-back losses have pushed me to expand my horizons a bit.

As of this post, the Bears have the following picks in the 2020 draft:

Having limited draft currency could limit what the Bears do ahead of the NFL trade deadline on October 29, but could ultimately have a bigger impact on how the team re-tools next spring.

The good news is that there is one way Chicago could add to its draft portfolio. But for it to happen, the Bears would have to bite the bullet and essentially own up to a mistake signing.

Nick Korte of OverTheCap.com has the details:

Bears fans: I just noticed that Mike Davis's snaps on offense have plummeted after the first two weeks: only a grand total of 5 snaps since.

Could they afford to cut him before Week 10? Because if they do, their 4th round 2020 compensatory pick for Adrian Amos would come back.

Should the Bears cut running back Mike Davis *BEFORE* Week 10, they could position themselves to pick up a compensatory draft pick in 2020 for the Packers signing away safety Adrian Amos. That would give the Bears seven picks in the upcoming draft. And while it’s not much, it’s better than nothing.

To be clear, cutting Davis won’t be easy. The Bears signed Davis early in free agency and pitched him as an ideal fit for the offense moving forward. It is easy to write it off as a sensible deal, too. Davis was known as a good runner out of RPO packages and possessed an ability to catch passes out of the backfield and break tackles when in the open field. If used properly, Davis projected to be a weapon in a multi-dimensional rushing attack. But not only are the Bears not using Davis effectively … they aren’t using him at all.

Davis played zero offensive snaps in the team’s Week 7 loss to the Saints. Dating back to Week 2, Davis has just four touches in his last four games. In total, Davis has been given 15 touches this season (11 of which came in the season-opener against the Packers).

So … what’s the point of employing Davis at all?

I get that you need to have that third back available, but at this point it is fair to point out the Bears are paying nearly $3 million to keep Davis on the bench and to not have a compensatory draft pick. And while GM Ryan Pace has done a wonderful job in other facets of the team-building process, going through with this for much longer would be a pretty big mistake.

I’m not sure there’s much to worry about if you’re concerned the free agents the Bears lost in the offseason suffering a similar fate as Davis, thus, costing the Bears a shot at a compensatory pick. Though, it already happened with Kevin White during the summer.

Amos is staying put with the division-leading Packers. Eric Kush has missed just one snap as a starting guard for the Browns. Josh Bellamy has played the third most special teams snaps for the Jets, proving once again to be a key cog in the third phase. I suppose Bryce Callahan’s progress is worth keeping tabs on for the rest of the year.

The Broncos gave Callahan a three-year deal that could be worth up to $21 million, but has yet to play this season. Head Coach Vic Fangio recently said it is possible he won’t even play this season, per Nicki Jhabvala of The Athletic. I just don’t believe cutting Callahan is a feasible option for Denver, because doing so would cause the team to take a cap hit of nearly $6 million this year (which would be nearly $6 million less it can roll over into future salary cap savings). Waiting to cut Callahan in the 2020 NFL calendar year would be more beneficial for future salary cap implications.

You can take a glance at the compensatory draft picks cancellation chart from OverTheCap, which provides further insight into the conversation we had above.